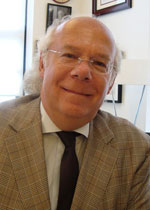 Background: What’s My Fertility and the Center for Human Reproduction in New York, have announced the first screening for Premature Ovarian Aging (POA) in young women, based on new research that the FMR1 gene can be predictive of POA.

How does POA differ from Premature Ovarian Failure?

Dr. Gleicher: Premature Ovarian Aging (POA) is a condition that causes a young woman’s ovaries to age faster than normal. It affects roughly 10% of all women, regardless of race or ethnic background. POA typically causes no symptoms until the ovarian reserve is already very low.

Women are born with all their egg cells (called oocytes). Scientists refer to this as a woman’s original “ovarian reserve.” From birth on, significant numbers of these eggs are constantly lost until menopause. As women age, their ovarian reserve, therefore, depletes and fertility declines.

In most women, fertility begins to decline around age 35 – but for women at risk for POA, fertility declines can begin as early as in their teens or 20s. POA in early stages typically has no symptoms. Most women until now, therefore, are usually only diagnosed after troubles conceiving become apparent, which brings them to a fertility specialist. At that point, most require stressful and costly infertility treatment to have children.

Premature Ovarian Failure (POF), sometimes also called premature menopause of primary ovarian insufficiency (POI) is the end stage of POA, when women reach menopause under age 40. Fortunately, this happens only to 10% of the 10% of women with Premature Ovarian Aging, – which means to 1% of the total female population. In those unfortunate few, even routine IVF can usually no longer help, and most of these women will only conceive with use of young donor eggs.

Medical Research: How many women are affected by POA?

Dr. Gleicher: 1 in 10 women are affected by Premature Ovarian Aging.

Medical Research: What does the What’s My Fertility screening include? Is the testing widely available? Affordable?

Medical Research: How can the screening benefit women as they plan pregnancies?

Dr. Gleicher: For women between the ages of 18 – 35, unless they are absolutely certain that they don’t want children, it is important to get screened for Premature Ovarian Aging because Premature Ovarian Aging typically has no symptoms. Once a woman’s ovarian reserve (the capacity of her ovaries to provide egg cells that are capable of conception) begins to decline, it continues to decline with time and we cannot tell how fast POA will progress. Early detection is crucial because early diagnosis of Premature Ovarian Aging offers women the option of either having children early in life or, if that is not possible, of freezing her eggs at still young ages, when they are most fertile.

What’s My Fertility is an innovative infertility risk screening program based on a patented algorithm developed by the physicians and scientists at the Center for Human Reproduction (CHR) in New York City, one of the world’s leading clinical fertility and research centers. What’s My Fertility screens young women for future risk of developing premature ovarian aging (POA) which affects 10 percent of all women and can lead to infertility. Young women can now screen for POA, which gives women at risk more reproductive options earlier in life, which are far more effective and less costly than later infertility treatments. To learn more about POA and the What’s My Fertility risk screening, visit https://www.whatsmyfertility.com.