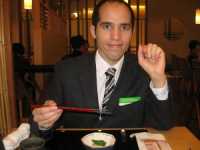 Response: We used over 200 peripheral molecular biomarkers, five different neuroimaging modalities and cognitive/clinical measurements to detect spatiotemporal abnormalities in subjects with dementia or with mild signs of cognitive deterioration. By means of a mathematical framework, we reordered all the biomarkers/descriptors considered, according to how much they change during the disease process. The results suggested that, contrary as suggested by more traditional clinical analyses, there are multiple early signs of neurodegeneration, at the molecular level and at the brain’s macroscopic and cognitive state. In particular, we observed notable early signs of generalized vascular dysregulation, which may be supporting the vascular hypothesis of Alzheimer’s disease. However, we still need to perform deeper analyzes, in order to clarify the complex causal mechanisms that trigger the disease.

Response: More than the conclusions and interpretations reported, the readers should take the crucial need of analyzing together all the possible data, including molecular biomarkers, multimodal brain imaging, and cognitive/clinical measurements. Only comprehensive multifactorial analyses will be capable of clarifying, from an integrative perspective, the complex biological mechanisms that conduce to neurodegenerative progression. To accomplish this, we should also continue developing integrative quantitative methods/algorithms capable of combining all the available relevant information.

Response: Future studies should be able to include as many biological variables as possible. In parallel, we should pass from the traditional association analyzes and their characteristic over interpretations, to identifying the basic multifactorial causal mechanisms that underlie the disease´s progression. Is only by the understanding of the factors that cause a given disorder, and not by the analysis of its concomitant correlations, that we will be able to understand this and eventually develop effective therapeutic strategies.