09 Jun Are Your Prefrontal Neurons Oscillating? You May Be In Love 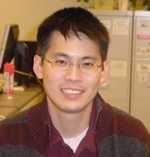 Response: This study describes for the first time some of the novel brain mechanisms underlying how social relationships are formed.  In this case we studied the formation of a pair bond in voles.  Pair bonding in voles is not exactly the same as love in humans, but we believe that pair bonding in voles likely shares many of the underlying neural mechanisms as falling in love in humans, such as developing a rewarding feeling towards your partner.

Basically, we discovered that rhythmic oscillations of groups of neurons in the prefrontal cortex, an area of the brain that is involved in decision making and executive function, can control the strength of oscillations at a different frequency in populations of neurons in the nucleus accumbens, an area that is involved in pleasure and reward, as well as addiction.  We show that the strength of that PFC-NAc control predicted how quickly animals would begin to show affectionate behavior, analogous to people who may fall in love quicker than others.  But the most intriguing thing was that when animals mated for the first time, the strength of the control of the reward system by the decision making circuit increased, and the greater the increase in that control, the faster the animal started huddling or showing affection toward its partner.  We think that this cortical control of the reward system allows for the neural encoding of the partner’s features (odors, sounds) to become stamped into the reward system, so that the partner becomes rewarding themselves.  Indeed in studies in humans, parts of the striatum, to which the nucleus accumbens belongs, become activated when men look at images of their lovers or when mothers look at images of babies.

We not only observed that during pair bond formation the cortex controls rhythmic activity within the reward system, but we actually recreated that communication using a highly innovative technique that allows us to control neural activity using light.  We expressed a light sensitive protein in the cortical neurons that project to the reward system, and then light stimulated those projections in the reward system in animals at the same frequency as normally happens during mating, but in this case the animals were not allowed to mate. By simply recreating the neural oscillatory control of the cortex of the reward area when the female was near the male, we biased how affectionately she acted towards him.

We think that the implications for this is not restricted to forming bonds or falling in love, but tells us something fundamental about how certain brain circuits communicate with each other to build social relationships, to make us feel pleasure from being with others that we like.  We believe that by understanding how social cues get instantiated into the brain’ reward system, we may ultimately be able to use this information to help people with impairments in the forming strong social relationships, such as in autism or schizophrenia.

Response: The technology to do these kinds of neural recordings and manipulations are relatively new.  They have been around for a few years in mice, but never before has anyone performed electrophysiological recordings or optogenetics in voles.  Prairie voles are ideally suited for studying the formation of bonds, because they pair bond for life.  Mice and rats do not.

MedicalResearch.com: Why hasn’t anyone discovered this before?

Response: The technology to do these kinds of neural recordings and manipulations are relatively new.  They have been around for a few years in mice, but never before has anyone performed electrophysiological recordings or optogenetics in voles.  Prairie voles are ideally suited for studying the formation of bonds, because they pair bond for life.  Mice and rats do not.

MedicalResearch.com: What led you down this path of study?

Response: Dr. Young, a close collaborator on this work, has been studying the neurochemistry and neuroanatomy of pair bonding for more than 20 years, and we know quite a bit about the chemicals and brain structures involved in pair bonding.  But knowing where these chemicals act in the brain doesn’t tell us how they affect the brain activity on the moment-to-moment interactions between individuals. We wanted to take advantage of the recent advances in neuroengineering that allows us to very precisely listen to groups of neurons communicating with each other during active behaviors, and then to recreate that under different circumstances to demonstrate the causal link between neural communiation and bonding.

MedicalResearch.com: Why did this have to be done in animals?

Response: Studies in humans can give us some insights into the brain mechanisms of processes like love using brain imaging techniques, but these techniques are rather crude and not temporally precise. Neurons communicate with each other at very short timescales.  In humans we could never implant recording electrodes into multiple brain regions while social relationships are formed, and we certainly could not use the sophisticated optogenetic manipulations to demonstrate the causality of the circuit we were recording from.

Response: We will be examining how the social information from a partner, e.g. their smell or voice, gets transmitted to the reward area.  We believe that forming a bond likely involves multiple other brain areas working in concert with the two that we focused on in this study.  Social information may be transmitted from a structure known as the amygdala to the reward area, in a coordinated fashion with the signals coming from the prefrontal cortex, and we would like to understand this coordination.  We are also studying how the chemical called oxytocin, which is known to be essential for creating parent-offspring bonds as well as pair bonds, facilitates neural communication between all these areas, to make your partner, your friend or your colleague a pleasure to be with.