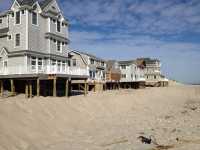 Response: Our research team has been interested in how people respond to the repeated threat of disaster exposure for many years. We recently published a review of the literature on evacuation from natural disasters, and one of our main findings was that there have been no studies that include assessments of individuals’ intentions, perceptions, and psychological states assessed prior to an approaching storm’s landfall – all prior research has been retrospective, and recall is undoubtedly biased and unreliable.  Our goal in undertaking this study was to fill this hole in the literature. We sought to assess individuals’ responses to Hurricane Irma in the days leading up to and immediately after its landfall in the State of Florida.

Response: We conducted a study of a representative sample of over 1600 individuals across the state of Florida, who were surveyed in the 60 hours prior to Hurricane Irma making landfall in Florida and again one month later. We found that individuals’ pre-storm expectations for how stressed they would feel after the storm were strongly associated with how much media they attended to before the storm hit. We examined people’s use of traditional media (like television, radio or print), online news sources, and social media.  We also found that the more storm-related media individuals consumed before the storm made landfall in Florida, the more distress they reported about one month later. These relationships still held when accounting for pre-storm mental health ailments, whether individuals were directly exposed to the storm, and whether or not individuals believed themselves to be in an evacuation zone.

Response: One important takeaway is that individuals should make careful decisions about their media use during periods of uncertainty before a disaster. Of course, the media can serve as an important source of information for people who are anticipating an oncoming threat; however, what we have consistently found is that individuals who are immersing themselves in many hours of disaster-related media content react the most negatively to these events, rather than finding solace in the constant flow of information. Additionally, it is those individuals who are most worried before a storm about their post-storm psychological responses who are most vulnerable to the consequences of this exposure.

Response: We recommend that more research be conducted that focuses on responses in the pre-storm period as indicators of post-storm behavior and psychological responses. Because individuals’ memories and perceptions are malleable and can change over time, it is important to conduct prospective research that includes assessments both before and after the storm, rather than only retrospective reports.

Response: One important strength of this study is that we used a large sample that was representative of the population of the state of Florida itself, which allows for population inferences. We also followed this sample into the 2018 hurricane season and hope to report future findings on the role of repeated exposure to the threat of disaster. This study was funded by a grant from the National Science Foundation.