Response: Dr. Alan Snow, a world-renowned expert in Alzheimer’s disease memory loss and brain aging, about 20 years ago (while at University of Washington) first discovered a woody vine from the Amazon rain forest known as Cat’s claw (Uncaria tomentosa) that possessed inherent ability to markedly inhibit and reduce brain plaques (containing beta-amyloid protein) and tangles (containing tau protein). Brain plaques and tangles are two of the three most important targets for causing memory loss (with the third target being inflammation). Thus, as you age nearly 95% of the aging population will acquire (Plaques, Tangles and Inflammation (PTI).

Dr. Snow first revealed to the public, after over 15 years secret research, in a 108-page landmark paper in Feb 2019 (Scientific Reports – a Nature Journal) that identified the ingredients (i.e. components) in cat’s claw (Uncaria tomentosa)
responsible for the marked brain plaque and tangle reducing activity he discovered. This paper entitled “The Amazon rain forest plant Uncaria tomentosa (cat’s claw) and its specific proanthocyanidin constituents are potent inhibitors and reducers of both brain plaques and tangles” (see attached) identified specific polyphenols and proanthocyanidins in cat’s claw responsible for markedly reducing brain plaques (by 58%) concurrent with marked improvements in memory loss (by 59% and nearly back to normal), following 3 months of treatment in plaque-producing transgenic mice using the main component of cat’s claw. This correlated with a marked improvement in short-term memory (by 59% and almost back to normal) in old plaque-producing transgenic mice in which nearly 10% of their cortex were initially filled with brain plaques. The cat’s claw component also caused a marked reduction in neuroinflammation (by 69-80%) in these animals. This paper was awarded the Top 100 Most Downloaded Research Articles of 2019 by Nature medical journals . 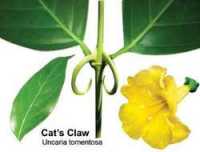 The Peruvian tribes used cat’s claw bark for over 2000 years as a plant. in which the bark at the bottom of the tree was cut, and then the bark bundles were boiled and drank as a medicinal tea. Keplinger in 1989 and 1990 has two issued US patents in which he demonstrates that cat’s claw bark has in it specific alkaloids that enhanced the immune system. Dr. Snow in the early 2000’s, stumbled across this same plant after walking into a vitamin store to take supplements off the shelf, to test them as potential brain plaque inhibitors. He discovered that cat’s claw (Uncaria tomentosa) bark powder made brain plaques (i.e. beta-amyloid protein fibrils) and brain tangles (i.e. tau protein paired helical filaments) fall apart very quickly (and then are believed to be cleared from the brain by the scavenger cells called microglia). Dr Snow working with New Zealand Crop and Food Research at University of Otago in New Zealand (experts in plant extract research) discovered that the cat’s claw contained specific polyphenols and proanthocyanidins (some never discovered before) that were key components for the observed effects. It turns out that the main ingredients in cat’s claw get into the brain in 2-minutes and form a“hydroxyl-wedge”, to specifically fit into a groove, secondary folding in brain plaques and tangles, that made the insoluble fibrils/tangles fall apart and be dissolved.

In 2015, Dr. Alan Snow and Dr. Rudolph Tanzi (MGH and Harvard University) who had been working in the brain aging and memory loss fields for over 30 years, decided to form a new Company called Cognitive Clarity Inc. They developed the world’s first oral nootropic to target the accumulation of brain plaques and tangles in the aging brain. All of this research over a 2-year period led to the development of a new dietary supplement called Percepta® -consisting just of two major ingredients – PTI-00703® cat’s claw and a specific oolong tea extract based on Dr. Snow’s work while at University of Washington (Seattle), and then at 2nd private companies.

New Study to be Published on Feb 15, 2021 in Scientific Reports (a Nature Journal)

In the latest study to be published on Feb 15, 2021 in Scientific Reports (a Nature journal), Dr. Snow and his research team compared over 20 of the top-selling major memory-support dietary supplements for their ability to reduce beta-amyloid fibrils (i.e. plaques) and tau tangles (i.e. tau protein twisting filaments), two of the three major targets for memory loss. Although there are now thousands of brain supplements on the market today, each one of them claims to improve your memory, focus and concentration. These include such famous and well-known brands such as Prevagen, Neuriva, FOCUSfactor, Alpha Brain, BrainMD, Procera AVH, NAD+OVIM, Percepta and many others. In the study, each of these memory-support memory supplements were directly compared in a blinded fashion and on a weight-to-weight basis (what the consumer actually ingests) to determine which of these dietary supplements could actually reduce brain plaques (beta-amyloid fibrils) and tangles (i.e. tau tangles), and by how much. Both beta-amyloid fibrils and tau protein tangles were formed in a test-tube (identical to that seen in the human aging brain) and treated at increasing concentrations with each memory-support dietary supplement. This was the first study to actually tackle the topic of directly comparing different memory-support dietary supplements to each other.

Response: The main findings of the study is that the dietary supplement, Percepta®, consisting of PTI-00703® cat’s claw + oolong tea extract, markedly reduced brain plaques and tangles by more than 50% (more than double) directly compared to the other 20 memory-supplements tested. Percepta® reduced brain beta-amyloid fibrils (i.e. plaques) by 69.6%, and tau protein filaments (i.e. tangles) by 85.7% (Table 1), and did so in a dose-dependent manner. At the electron microscopic level, the paper showed that Percepta® when in contain with plaque fibrils can nearly dissolve them near instantly (i.e. makes them fall apart). In the study, the memory-support dietary supplements that contained cat’s claw (i.e. Alpha Brain, NOOCUBE, Healthycell Pro) or polyphenols such as green tea (US Doctor’s Clinical Brain Advanced; Brain Juice; Neuriva; EXCELEROL) also had some plaque and tangles reducing activity, but were less than double the marked reducing effects observed with Percepta®.

MedicalResearch.com: What is Percepta® and Where Can it Be Found?

Response: Percepta® is the world’s first oral nootropic to target the real reason we lose memory as we age- brain plaques and tangles. It can be purchased at www.perceptabrain.com (discounts for monthly subscriptions) and on Amazon.com

It is backed by over 30 issued patents and over 15 years of research studies by Dr. Snow and his research teams for the improvement of memory, focus and concentration by reducing brain plaques and tangles.

Response: Percepta® out-performs all major memory-support dietary supplements tested for their ability to inhibit and reduce brain plaques and tangles – that has been shown to be two of the major targets for memory loss. Reduction of brain plaques and tangles leads to improved memory, focus, concentration and executive function as has been shown by over 30 years of scientific studies in major medical journals.

Prevagen (Quincy Biosciences) does not seem to work at all on reducing brain plaques and tangles, whereas Neuriva (Schiff Vitamins) has some effects due to the presence of coffee cherry polyphenols. However, neither are even close to the effects seen with Percepta®.

Response: Based on all of these positive results, we will be implementing a large human clinical trial with Percepta® to demonstrate its postulated marked improvement in memory, focus, concentration and executive function (i.e. processing speed). Many of our testimonials (see www.perceptabrain.com ; testimonials) already describe customers experience with improving their memory, focus and concentration usually within the first 1-3 months of taking Percepta® on a regular basis

Any Disclosures? All financial disclosures are directly stated in the research article. The studies were implemented in a blind fashion.