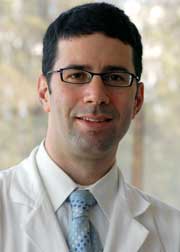 Dr. Levine: This work stemmed from a known finding that female mice tolerate kidney injury better than males and this is true of mice that share exactly the same genes.  Therefore, the gender difference was the driving factor.  My basic science laboratory works at the intersection between scientific discovery and clinical application and this led us to question whether the same phenomenon was true in humans and whether we could identify a way in which this could be used to improve injury tolerance above what is seen in untreated subjects.  What we found was that the hormonal environment seems to impact ischemia tolerance, with female environment being protective and the male environment worsening injury tolerance in ischemia models where blood flow is interrupted and then restored.  The kidneys seemed to adapt to take on the injury response of the host after transplantation, indicating that the differences were not forged into the kidney itself and therefore could be altered.  We then found that estrogen therapy improved kidney injury tolerance when given to female mice in advance of injury, but no effect was seen in male mice.  And most importantly, we found that in a large cohort of transplant recipients that female recipients had better injury tolerance after transplant than male recipients, as shown by ability to avoid dialysis in the first week after transplant, otherwise known as delayed graft function (DGF). This is a fairly major finding since it has not been observed in the literature despite several decades of transplant data being carefully studied.

Dr. Levine: My belief is that this is a promising avenue to try to improve tolerance of renal injury – a pervasive and costly medical problem for which there is no current specific therapy.  Our data would indicate that the easiest way to leverage these effects would be in female patients and that there may be significant barriers to yielding similar effects in males.  We plan to initiate the study of this possibility in a clinical trial in organ transplantation.  Hormonal therapy may have beneficial impact in scenarios beyond transplantation – for example cardiac or vascular surgery – where kidney injury can be predicted in advance.

Dr. Levine: We plan to further study the mechanism of these effects, and have work underway to understand how the estrogen therapy is working, via what receptor, and through what pathway.  We are planning a clinical trial to study this in female patients to test safety and to see if there is sufficient hints of benefit to justify a larger multicenter trial.

Dr. Levine: We are enthusiastic about this work.  This effort in our laboratory has taken a number of years to reach fruition and has been the work of several dedicated individuals.  We have also been fortunate to have strong collaborators on the Penn campus who have furthered the work and we have benefited from some prior inquiries into this subject by other scientific groups.  We hope that these efforts are able to translate to patient benefit over time.