Response: Lyme disease is caused by the bacterium Borrelia burgdorferi and is transmitted to humans through the bite of infected blacklegged ticks, also called deer ticks. Lyme disease is the most commonly reported vectorborne illness in the United States, with approximately 300,000 humans becoming infected each year.

While Lyme disease infections are highly concentrated in the northeast and upper Midwest, the number of counties in which the blacklegged tick has become “established” has more than doubled in the past two decades. Established populations of these ticks are found in 35 states.

Knowing that Lyme disease is increasing both in numbers of infections and in geographic range in the United States, we did this study to determine if people are at risk of encountering infected ticks while recreating in eastern national parks. This is the first large-scale survey in multiple national parks, and though suspected, it had not been confirmed that ticks in many of these parks were infected.

So the purpose of the study was to survey national park units across six Northeastern and Mid-Atlantic States and the District of Columbia, ranging from Maine in the north to Virginia in the south and characterize the risk of human exposure to ticks-borne bacteria.

We also documented the presence of blacklegged ticks in two new areas, Greene County, Virginia, and an urban park in the District of Columbia. The parks sampled represent only a small portion of national parks and recreational opportunities in the area.  The results of the study likely represent recreational risk in other parks in the eastern United States not sampled.

Response: The results of this study serve as a reminder that, while enjoying the parks, visitors should take steps to help protect themselves and their loved ones from tick bites.

Promoting prevention efforts in these national parks may be particularly important for those visitors traveling from areas where Lyme disease is not common. These visitors may be unfamiliar with ticks, tick bites, and the symptoms of tickborne disease.

Some tick bite prevention tips include: 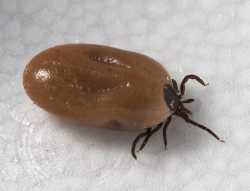 The blacklegged or deer tick, Ixodes scapularis, transmits Lyme disease, a disease caused by a spiral shaped bacterial microbe, Borrelia burgdorferi. This disease is known from Europe, Africa, Asia, and in almost all the United States. It is especially common in the Northeast, in Minnesota and in northern California. This larval tick is no bigger than the size of the period at the end of this sentence.  CDC Image

It’s also important to know that blacklegged ticks need to be attached for at least 24 hours before they can transmit Lyme disease. For this reason, daily full-body tick checks can help you find and remove ticks before they attach or have time to transmit disease.

More information can be found at https://www.cdc.gov/lyme/.