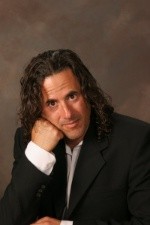 Response: W. Bradford Wilcox and I have been studying marriage and divorce for fifteen years. Last year we published Soul Mates: Religion, Sex, Love and Marriage among African Americans and Latinos (Oxford University Press). We’re always looking for opportunities to present our findings to the public, so Valentines Day is a great excuse!

It’s probably too strong a statement to call our new research brief a study, as we’re not offering any novel findings. Instead, we’re just compiling data from different sources—some published by other scholars, some based on our own analysis of national data—to reaffirm a basic point: marriage is good for men in myriad ways (Marriage is also good for women, but they await their own research brief.) In particular, marriage offers these benefits to men: 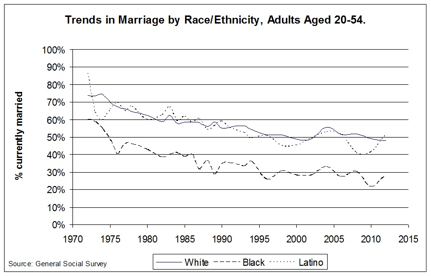 Trends in Marriage by Race and Ethnicity

MedicalResearch.com: Aside from Valentines Day, why did we write this research brief?

Response: There are two reasons. The first is what’s been called the “retreat from marriage,” the fact that Americans will spend less of their adult lives in a marriage than they have in years gone by. Although the divorce rate is at a 35 year low, it’s still high by historical standards. Also, Americans are waiting longer to get married than ever before. For these reasons, the percentage of Americans who are married at any given point in time has declined a lot in recent years (see attached figure).

At the same time, we shouldn’t pronounce marriage to be dead and buried. The overwhelming percentage of Americans still want to get married, and somewhere in the neighborhood of 85 percent will do sometime in their lives.

The second reason we wrote this research brief is the rise of the Men Going Their Own Way (MGTOW) movement. This is a group of men who have publicly renounced interest in marriage and, in some cases, relationships with women altogether. Some MGTOW adherents feel mistreated by women; others feel they have to cede too much freedom if they opt for marriage. MGTOWers have reported bitter custody disputes and being unfairly deprived access to their own children. Given their publicly strident views of marriage, they have clashed publicly with my collaborator W. Bradford Wilcox. Our research brief is our response to MGTOW.

Response: Marriage is good for men, but that’s only part of the story. Obviously, there are some men who aren’t good candidates for matrimony. Nor is marriage a panacea: Americans who are already struggling financially, for instance, won’t automatically be lifted out of poverty by acquiring a spouse. Marriage is often beneficial to men’s bank balances and their overall well-being, but structural reforms to our labor market and welfare state would do wonders to support healthy marriages.

Obviously women merit their own research brief. Linda Waite and Maggie Gallagher’s landmark 2000 book, The Case for Marriage: Why Married People are Happier, Healthier, and Better off, and many other studies have shown strong benefits of marriage for men and women alike.

Much less is known about same-sex couples given the relatively recent advent of marriage equality. Also, under two percent of the population is homosexual, and of course many gays and lesbians aren’t married. This all makes collecting representative samples of same-sex marriages more difficult. Accordingly, more research is needed.

Finally, I’d welcome more progress on the Holy Grail of research on the benefits of marriage: the question of sample selection. Does marriage itself produce benefits for health, happiness, and finances, or is it just that healthier, happier, and wealthy men are most likely to get married? It’s clear that both are true to a certain extent. Obviously W. Bradford Wilcox and I think that marriage does produce direct benefits for men and women. Nevertheless, new research approaches that offer greater traction on this question would be welcome.

Nicholas H. Wolfinger is Professor of Family and Consumer Studies and Adjunct Professor of Sociology at the University of Utah. His most recent book is Soul Mates: Religion, Sex, Children, and Marriage among African Americans and Latinos (with W. Bradford Wilcox; Oxford University Press, 2016). Follow him on Twitter at @NickWolfinger.