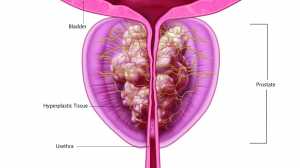 Pre Treatment.jpg: Benign prostatic hyperplasia (BPH) is an enlargement of the prostate gland, affecting 12 million men in the U.S., with nearly 800,000 newly diagnosed each year. An enlarged prostate squeezes down on the urethra causing lower urinary tract symptoms.

Response: Male lower urinary tract symptoms due to benign prostatic hyperplasia, or LUTS due to BPH, have most commonly been treated with a combination of medication, such as alpha-blockers and 5-alpha reductase inhibitors, and surgery, such as transurethral resection of prostate (TURP) and Greenlight photovaporization of prostate (PVP). These treatments, however, have potentially serious adverse and sexual side effects. Minimally invasive surgical therapies (MIST) for LUTS due to BPH have tried to thread the needle between medications and invasive surgery, giving effective relief of symptoms with minimal anesthetic need while preserving sexual function. Previously developed MISTs have been unable to provide durable relief of symptoms, causing patients to undergo multiple treatments in a short period of time, and have been limited by prostate size and conformation, e.g. the inability to treat a middle lobe or median bar. LUTS due to BPH is also very strongly and likely causally linked with obesity, and obesity seems to have an effect on the efficacy of treatment as well, as obesity affects response to medication and tends to dampen the treatment effect of TURP.

Convective Radiofrequency Water Vapor Energy ablation of the prostate, named Rezūm®, is a new MIST that uses radiofrequency to generate energy in the form of water vapor. The water vapor acts as a convective energy source and, once injected into the treatment area, distributes itself evenly within the treated tissue, causing uniform necrosis througout the treated area. This mechanism using convection is in contrast to previous technologies using conductive heat energy, which created a heat gradient with tissue closest to the heat source receiving the largest amount of energy and tissue farthest from the heat source receiving almost no energy. Thus conductive energy has a different effect on different parts of the treated area. With Rezūm, MRI studies have shown that the water vapor creates a uniform treatment effect while staying within collagen barriers, obeying natural tissue planes and affecting only the intended treatment areas.

The purpose of this study was to determine the efficacy of Rezūm in treatment of LUTS due to BPH, examine the treatment’s effect on sexual function, and to determine whether obesity affected treatment efficacy.

. Prostate After Treatment.jpg: Over time, the body’s natural healing response removes the dead cells, shrinking the prostate. With the extra tissue removed, the urethra opens, reducing BPH symptoms. Most patients begin to experience symptom relief in as soon as two weeks and maximum benefit will occur in about three months.

Response: The study found that Rezūm effectively treats LUTS due to BPH, with a 275% greater improvement in urinary symptoms at 3 months than the sham procedure, and that this improvement was durable through 1 year, which was the end of this study. Rezūm also improved urinary flow rate and the impact that LUTS had on subjects’ lives in a similar fashion.

When looking at special groups, 30 treated subjects had a middle lobe or median bar treated with Rezūm, and their symptom improvement was similar to subjects without a middle lobe. Obesity also did not seem to affect treatment, as a similar percentage of obese subjects achieved at least a 50% improvement in symptoms as compared to their nonobese counterparts.

Again, obese subjects did not have a different treatment effect, as a similar number of obese subjects achieved a measurable improvement in erectile function as compared to their nonobese counterparts.

Response: Rezūm effectively treats LUTS due to BPH in men with prostates of moderate size regardless of conformation, while preserving sexual and erectile function.

Obesity does not seem to affect treatment with Rezūm, which may be a unique feature of this treatment.

Response: The durability of Rezūm still needs to be proven. 2-year data, recently published in the Journal of Urology, shows that the treatment effect is durable through 2 years, but long-term durability still needs to be shown by following these patients for 5+ years.

In addition, as more Urologists adopt Rezūm as a treatment option for their patients, studies must be done to investigate whether results outside the controlled setting of a trial are similar to what has been shown already.

Dr. Nikhil K. Gupta has nothing to disclose. Dr. Kevin McVary was a co-principal investigator for the Rezūm II trial.