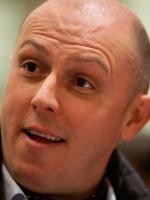 Dr. Bailey: This study started with our interest in salt homeostasis and long term blood pressure, so it’s firmly rooted in the cardiovascular/renal disease risk factor arena. We were interested in salt-sensitivity- why does blood pressure go up in some people when they eat salt but not in others. I’m a renal physiologist, so we had a number of papers looking at renal salt excretion and blood pressure. We initially used a gene targeting approach to remove a gene (Hsd11b2) which acts as a suppressor of the mineralocorticoid pathway. It’s mainly expressed in the kidney and when we deleted the gene  throughout the body we saw a number of renal abnormalities all associated with high mineralocorticoid activity. This was consistent with the “hypertension follows the kidney” theory of blood pressure control. There is a human disease called “Apparent Mineralocorticoid Excess”- there are people do not have the gene and are thought to have renal hypertension. Our study threw up some anomalies which we couldn’t easily interpret but suggested that the brain was involved. We moved to a more refined technology that allowed us to knockout a gene in one organ system but not another. We knew the gene was in the brain and localized to a very restricted subset of neurons linked to salt-appetite and blood pressure control. Previous studies had shown that these neurons were activated in salt-depleted rats (ie rats that needed to eat salt). We started there but didn’t anticipate that the effect on salt hunger and on blood pressure would be so large because renal function is -as far as we can tell- normal.

Dr. Bailey:  The main findings are these: removing this gene in a small number of nerve cells in the brain stem has two large effect:

Dr. Bailey:  Great question- this is fundamental science defining basic physiological processes but societal implications are interesting- the UK has a recommended salt intake of 6g per day but the population eats 8.5g per day. (Similar in the USA and most other nations that I’ve looked at.) The WHO recommends 5g per day, so we are all habitually eating too much salt. Unlocking the pathways in the brain that control our hunger for salt will help us understand better our relationship with the food we eat. In a broad context, the same pathways that control salt hunger in the brain are controlling salt taste by the tongue, salt uptake from food by the gut and salt excretion by the kidney. This makes evolutionary sense but the environment has changed- salt isn’t scarce anymore and gain-of function mutations can give us multiple hits for salt induced hypertension.

Specific clinical implications are for certain patients groups (heart failure, kidney failure) that have to reduce salt intake but find it very hard to do.  We found in our study that we could manage salt intake in the mice by giving them a daily oral dose of spironolactone, a mineralocorticoid antagonist. Certain patient groups (heart failure for example) are advised to lower salt intake but compliance is poor. Spironolactone is already widely used in humans and is cheap ( less than 0.50 USD per day). It could be used to help certain patient groups control salt intake as part of their clinical management.

Dr. Bailey:  We were funded by research charities- the British Heart Foundation and Kidney Research UK.

Conditional Deletion of Hsd11b2 in the Brain Causes Salt Appetite and Hypertension.