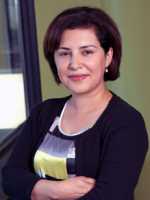 Dr. Salamova: Flame retardants are industrial chemicals that are added to a wide variety of commercial and consumer products to slow the spread of fire and delay ignition. These chemicals are used in electronics, furniture, building insulation, textiles, and many other products.  While flame retardants serves a purpose of saving lives in the case of fire, the extensive use of these chemicals has resulted in a widespread environmental contamination.  These chemicals can escape the products in which they are used by evaporation or weathering off of the product. Flame retardants have been found in indoor and outdoor air, water, soil and sediment, plants, animals and people around the world. There is some evidence that some of the chemicals are toxic. Number of toxicological reports suggest that these chemicals are toxic to our reproductive and neurological systems and that exposure to these chemicals is associated with learning disabilities, obesity, and endocrine disruption.

Despite these findings there are still many unknowns about the adverse health effects of these chemicals on human health. Large and long-term biological monitoring programs are needed, in which large populations are monitored in terms of exposure to these chemicals. However, one of the difficulties in conducting long-terms biomonitoring programs is the lack of an easy, convenient, and cost-effective biological marker of exposure.  Biological marker of exposure is a measurement of a specific chemical or its metabolite in a specific tissue in the human body, which accurately reflects the level of exposure to the chemical of interest.

Conventionally, most of the studies on flame retardants in human tissues have focused on measurements in milk, blood and urine. But using these tissues is either limited in terms of population, or collection – the tissues are invasive or complicated to collect. In fact these problems are often cited as common reasons for people’s refusal to participate in the study and donate tissues. This is especially significant for the most vulnerable populations, such as children, pregnant women and elderly. This is important, because it has been shown that children are at higher risk of exposure to flame retardants as concentrations found in children’s blood are higher than those found in adults.

Clearly, there is a need to find a convenient noninvasive biomarker of exposure to flame retardants and that was the goal of this study. The discovery of an easily available biomarker should ease the way for further research to determine the human impact of these chemicals commonly found in the environment.

Human hair and nails are good examples of noninvasive biomarkers. Compared to other tissues, these samples are easy to collect. Collection is also less expensive – anyone can do it at home. In fact, that is what we asked the participants in our study to do – they collected nails at home and mailed the samples to us. Also, these matrices are stable, so you don’t need anything special for their transport to the lab and storage. These are slowly growing tissues, thus they can provide information on both past and present exposure. In order to examine hair and nails as biomarkers of exposure to flame retardants, we collected hair, fingernail, toenails, and blood samples (simultaneously) from 50 residents of Bloomington, Indiana, mostly students. We wanted to know if we would be able to see any flame retardants in hair and nails, and if the levels in these samples would be correlated with the levels in blood.

Dr. Salamova: We found flame retardants in all the hair, fingernail, toenail, and serum samples collected. The levels found were very variable, and some of them were very high. For a certain organophosphate flame retardant, the levels in women’s hair and nails were higher than those in men’s hair and nails. We think that this could be due to the use of this chemical in women’s personal care products. Also, we found that there was a strong relationship between the levels of a large group of flame retardants, the polybrominated diphenyl ethers or PBDEs, in hair and nails, on the one hand, and those in blood, on the other. This suggests that hair and nails can reflect the internal body burden of these chemicals.  It is interesting to note that the concentration profiles that we found in hair and nails reflect the shifts that we have witnessed in the flame retardants market over the last decade. We have measured a wide range of different flame retardant chemicals – about 60, and some of these chemicals have been already banned from production and use, and some of them are on the rise in their use as replacements for the banned ones. The profile that we found in our samples consists of lower levels for the banned chemicals and higher levels for the chemicals that are higher current use as replacements. This result reflects the historical changes of flame retardants applications in household and commercial products.

Dr. Salamova: I think future research in this area should focus on examining the relationship between the levels of chemicals in hair and nails and health end points, such as thyroid function and obesity. In addition, it is important to investigate the presence of flame retardant metabolites in these matrices versus their presence in blood or urine, as well as develop analytical methods for measuring other  important environmental pollutants in these matrices, for example organochlorine pesticides and phthalates. ​

Liang-Ying Liu, Ka He, Ronald A. Hites, and Amina Salamova