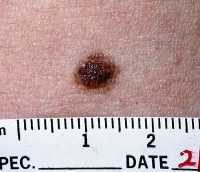 Response: High heterogeneity has been reported in previous studies on the ratio of melanoma associated with moles (nevus-associated melanomas).

Despite this heterogeneity, researchers agree that some melanomas may develop in conjunction with a pre-existing mole.

Defining the risk for a melanoma to arise in association with a pre-existing mole is important in order to define the best strategies for early melanoma diagnosis.

The main finding of our study is that only one third of melanomas arose from a pre-existing mole, in fact the majority were de novo.

We also found that nevus-associated melanomas were less aggressive than de novo.

Response: Patients and physicians should be aware that a patient with a lot of moles is at higher risk to develop a melanoma but themelanoma will likely appear on his skin without moles!

For this reason, complete skin examination could be a more effective follow up than follow up of selected atypical nevi alone for early melanoma diagnosis.

Response: Future research should define why certain melanomas are associated with nevi.

In fact, even though chance could play a role, this association occurs more frequently than it would be expected by chance alone.

Also, the less aggressive behavior of nevus-associated melanoma should be confirmed by future studies.

Response: The last finding of our study regards association of nevus-associated melanomas with atypical (dysplastic) or non-atypical (non-dysplastic) moles.

We found no differences at this purpose; this seems to indicate that melanoma doesn’t develop from malignant degeneration of a pre-existing mole even when it is nevus-associated.