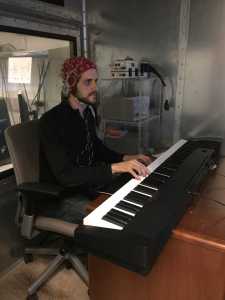 09 Jul Understanding the Neuroscience of Creativity Through Music Improvisation

Response: Many Western musicians have difficulty improvising, despite having extensive training and experience. These musicians learn about and use similar musical structures in their playing (like chords, scales, rhythmic patterns, etc.) as experienced improvisers, but they may know about them in different ways. In other words, different musicians have different ways of knowing and learning about similar musical structures. To understand which ways of knowing facilitate the ability to improvise contributes to an understanding of how people are able to use knowledge creatively. Western music provides an important opportunity to compare these different ways of knowing because in other improvisatory domains of behavior (like speaking), it is difficult to find people who know how to do it but cannot improvise with it (e.g., if you know a language, you can very likely improvise with that language).

In order to advance our understanding of these improvisatory ways of knowing, we compared musicians with varying degrees of improvisation experience in a task that tested how they categorized musical chords. In Western music, different chords are theorized to have similar “functions.” For example, on a guitar, there are different ways to play a C chord, and you could often substitute one for the other. You might even play another chord in place of the C chord and have it sound similar, or lead to a similar subsequent harmony. Improvisers often use notation that specifies classes of chords rather than specific realizations (versions) of a chord whereas those who do not typically improvise use notation that specifies the full realization of the chord. By analogy, one chef might use a recipe that calls for “citrus” (in music, a class of musical chord) while another chef’s recipe might specifically call for “lemon” (in music, a specific realization of a functional class of chords). We tested whether improvisers categorize similar-functioning harmonies as more similar to each other than different-functioning harmonies, and compared how less experienced improvisers categorize the same harmonies.

Our task required the musicians to listen to a series of repeating harmonies (the “standard” stimuli) and pick out occasional chords that were different in any way (the “deviant” stimuli). Some deviant stimuli were different versions of the standard chord (like limes in place of lemons) and some deviant stimuli were chords with different musical functions (like bananas instead of lemons).

The more experienced improvisers were better at detecting the function deviants than the exemplar deviants whereas the less experienced improvisers showed little difference in their ability to detect the two types of deviants. In other words, because improvisers categorize the different versions of the same chord as similar, they have a relatively harder time picking out the similarly functioning harmonies. This was measured using behavioral data, and electroencephalography (EEG), which can be used to provide a neural measure of how different stimuli are perceived to be from each other.

Response: This study provides evidence that experienced musical improvisers categorize musical structures differently. This difference would aid their ability to improvise because understanding how a set of exemplars of a particular musical chord are related would allow musicians to more fluently and efficiently recall them in a variety of musical situations (knowing more than one way to do something helps them improvise).

Thus, it is possible to research the neuroscience of creativity without directly asking how people make up new things, although those questions are also important to ask. Also, we were not looking at a particular part of the brain, but rather a feature of the organization of knowledge of experienced improvisers.

Finally, our study shows that the more experience you have, the more pronounced this effect is. This suggests that training is important in acquiring the ways of knowing that improvisers possess. However, we cannot rule out that other factors may influence how people categorize musical structures (it may not be musical training alone).

Response: We have described one way in which experienced improvisers differ in their way of knowing about music, but there may very well be other ways to describe this. There is a lot of work that can be done to examine difference between musicians in how they think about music, in part dependent on how they learn music. This has implications for pedagogy, for a better understanding of creativity, and for understanding music cognition more generally.

We have no disclosures to declare here.