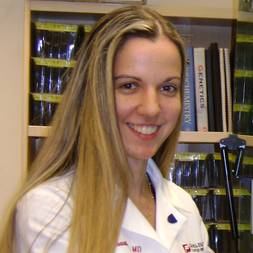 Response: Craniopharyngiomas are rare brain tumors that can cause serious problems because of their location near critical structures in the brain, such as optic and other cranial nerves, the pituitary gland and the hypothalamus. Not only does the growing tumor compromise neurological and hormonal functions by impinging on these structures, but treatment by surgical removal or radiation therapy can produce the same symptoms by damaging adjacent tissues. In addition, since the tumor adheres to these nearby critical structures, complete removal is difficult, which can lead rapid recurrence. Medical therapies have not been effective for craniopharyngiomas, namely because we did not understand the molecular underpinnings of these tumors. Last year, we performed genomic characterization of craniopharyngiomas, with the goal to identify potential therapeutic targets. We were surprised to find that nearly all papillary craniopharyngiomas have BRAF mutations, which are the same mutations that have been found in melanoma. We recently had the opportunity to translate our results to the clinic. A 38 year old patient presented to our institution, requiring 4 urgent neurosurgeries in 2 months for his papillary craniopharyngioma. When we presented a fifth time, we treated him with a therapy that targets his BRAF mutation. After just 4 days of therapy, his tumor had shrunk by nearly 25%. Similar to what is done in BRAF mutant melanoma, we added a MEK inhibitor to his treatment. By day 34 of therapy, his tumor was more than 80% smaller. We  also detected the BRAF mutation in this patient’s blood.

Response: We are excited about these findings, as this is the first time that a systemic therapy has shown efficacy against this type of tumor.  As physician scientists, the greatest satisfaction comes when what we do in the lab helps patients. This has the potential of changing the management of papillary craniopharyngiomas, which can cause lifelong problems for patients – including visual defects, impaired intellectual function, and pituitary and other hormonal dysfunction. Finding BRAF mutation circulating in the blood raises the possibility of potentially diagnosing this tumor with a blood test and possibly shrinking these tumors with medical therapy before surgery, which could make surgical removal safer and possible unnecessary for some patients.

Response: We are now moving forward with a multicenter trial that will be run within the National Cancer Institute sponsored cooperative group, the Alliance.