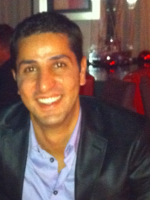 Dr. Khalil: This study aimed to identify other genes that work synergistically with the oncogene HER2 in HER2positive (HER+) breast cancer. The gene HER2 is amplified in those patients, which results in excess activities that promote uncontrolled cell growth. There are drugs that target HER2 and diminish its activity. However, these drugs can work initially, but patients relapse; or sometimes, the drugs don’t work at all in some patients.

Thus, by identifying other genes that work synergistically with the HER2 gene, we now have more genes to target by various drugs or compounds to destroy the tumor. The challenge was how to identify the key genes that work synergistically with HER2, especially in human subjects. To that end, we used clinical samples from a clinical trial of a drug that is known to inhibit HER2 activity to identify those genes. To further refine our list, we used cell culture models of the disease to also inhibit HER2. By combining those data sets, we identified 44 protein-coding genes.

Next, we wanted to make sure that those genes stand a third independent filter. For that part, we interrogated those 44 genes in HER2+ tumors vs matched normal tissues from The Cancer Genome Atlas database — a collection of hundreds of tumors and normal tissues. Of the 44 genes, 35 genes passed this third filter. By examining the known functions of those genes, we can deduce that those genes work cooperatively with HER2 to promote carcinogenesis.

There are currently known drugs that target some of those genes. We will use these drugs in combination with a drug that target HER2 to determine if the combination works better at destroying the tumor entirely.

Lastly, we found that a special type of genes that we previously discovered, called lincRNAs, could also affect the oncogenic activity of HER2. These lincRNAs can also be targeted with HER2 to eliminate the tumor.

Dr. Khalil: We now have a small set of genes that can be targeted for therapeutics in HER2+ breast cancer. We still need to do those studies to identify potential drugs that can be effective and eventually safe for clinical trials, but our study has now narrowed down the number of genes to study, which is a major step.

​Dr. Khalil: It is critical to look at genes and pathways directly in human patients, in addition to cell culture models and/or animal models. In many cases, things that are discovered in these other systems do not work when tested in human patients. ​This is a very unique aspect of our study. We identified those genes by examining human tumors before and during inhibition of the HER2 gene in vivo.