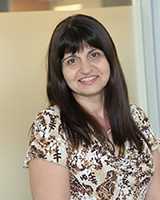 Dr. Petkov: The number of breast cancer diagnoses is increasing in older patients because of increasing life expectancy and changing population demographics. Despite high incidence, little is known about breast cancer biology and outcomes in patients older than 70, which are often under-represented in clinical trials. The 21-gene Oncotype DX Breast Recurrence Score assay has been used in clinical practice to predict distant recurrence risk and chemotherapy benefit in lymph node negative, hormonal receptor positive (estrogen and/or progesterone receptor positive) invasive breast cancer since 2004. The goal of our study was to evaluate the role of the 21 gene assay in older patients at population level.

Dr. Petkov: There was a huge disparity of who was tested that was associated with age. The older the patient, the less likely she/he was tested. The 21-gene Recurrence Score assay (Oncotype DX) predicts the survival from breast cancer irrespective of age. Patients with Recurrence Score less than 18 have excellent 5-year survival.

Dr. Petkov: The worse breast cancer survival in older patients with Recurrence Score greater than 30 compared to younger patients needs further investigation. For example, could co-morbidities (existing other diseases) and sub-optimal health status contribute to the poor outcome? Or is it the well-known undertreatmet of the elderly that primarily drives the worse survival?

Dr. Petkov: The Surveillance Epidemiology and End Results (SEER) Program at the National Cancer Institute (NCI) is one of the premier cancer surveillance programs in the world which covers 30% of the US population. Each SEER registry collects cancer related data as mandated by state specific laws. The SEER Program collaborated with Genomic Health Clinical Lab (the only lab performing the test) to supplement each SEER registry data with Oncotype DX Recurrence Score results which has been a required data element for cancer surveillance.