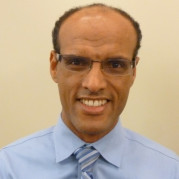 Dr. Sineshaw: Treatment receipt for black and white men diagnosed with early-stage breast cancer was remarkably similar in both younger and older age groups. However, younger blacks had a 76% higher risk of death than younger whites, which was significantly reduced after adjustment for insurance and income. In contrast, older black men did not have significant excess risk of death compared with their white counterparts.

Dr. Sineshaw: Future research should focus on how we can better address barriers in access to optimal care and equal outcomes for all men with breast cancer.