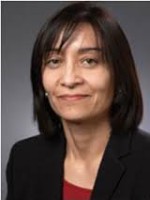 Nina Bhardwaj, MD, PhD and
Director of Immunotherapy and professor of Hematology and Medical Oncology

Medical Research: How did the discovery of the group of non-coding RNA molecules in cancer cells that sets off an immune response come about?

Dr. Greenbaum: Our work is a collaboration between my lab, which is computational, and the Bhardwaj lab, focused on cancer immunology. I had previously made the observation that certain RNA viruses were avoiding certain motifs, such as CpG dinucleotide containing motifs, and the Bhardwaj lab tested whether those motifs could set off an immune response. Recent work had shown that tumors transcribe unusual RNA with immunological consequences, so we investigated whether the same sort of approaches we had used for viral RNA worked here.

Dr. Bhardwaj: It has recently become clear that, due to epigenetic alterations, tumors transcribe non-coding RNAs that are typically silenced. Often such RNA emanates from the “dark matter” genome. Many of these regions consist of repetitive elements and endogenous retroelements that are rarely transcribed in normal tissue. At the same time, due to immunotherapy, understanding the role of the immune system and immune activation in tumors has become critically important. The activation of specific elements of the innate immune system in a tumor may have either beneficial or detrimental effects for patients. Moreover, recent work has suggested that endogenous element activation can lead to improved immunotherapy outcomes. Therefore, it is critically important to understand the nature of innate immune activation in tumors and what triggers are responsible for these responses.

We have been developing methods to detect abnormal patterns in viral RNA that may indicate activation of the innate immune system. We have found that patterns of motif usage avoided in the evolution of viruses, such as influenza, indicate RNA features that provoke an innate immune response. The innate immune system is capable of sensing motifs in viruses. We tested directly whether these avoided patterns are immunostimulatory.

Medical Research: Why do you believe these ncRNAs may play a significant role in mediating immune responses against cancer?

Dr. Greenbaum: It has become clear that the role of the innate immune system in the tumor microenvironment has important implications both prognostically and in terms of response to therapy. It is therefore important to understand what mechanisms underlie the activation of the innate immune response in tumors and the circumstances under which specific pathways are engaged. We hope our work will contribute to such an understanding.

Medical Research: What roles for ncRNAs have?

Dr. Greenbaum: Non-coding RNAs have been implicated in a variety of functions, and, for many of the ncRNAs that are transcribed even in normal cellular processes, what role they play, if any, has yet to be clearly established. For instance, many seem to have regulatory functions. In our case, we implicate a specific class of such RNA, which are not transcribed normally but may be transcribed in the dysregulated transcriptional environment of a tumor, as potentially immunogenic.

Dr. Bhardwaj: The biggest challenges are to identify the components of the innate immune response in tumors for which these RNA are responsible. Better characterization of more i-ncRNA, and their association with specific pathways, would help us better understand their role in the tumor microenvironment. We could then better link them to patient outcomes and when they could be utilized for patient therapy.

Medical Research: What is your next step?

Dr. Greenbaum: Our next step is to better understand the specificity of the individual ncRNAs we have identified and try to better link them to patient outcome and diagnosis. At the same time we are broadening our computational models to improve predictions and identify additional ncRNAs that may play a role.

Medical Research: Will you be partnering with other institutions?

Dr. Greenbaum: We are currently collaborating with researchers at the Ecole Normale Superieure in Paris, Massachusetts General Hospital, the Simons Center for Systems Biology at the Institute for Advanced Study, the Rutgers Cancer Institute of New Jersey, and the Roswell Park Cancer Institute.

Medical Research: What is the commercial potential?

Dr. Greenbaum: By identifying novel ncRNAs that have immune impact we may be able to design approaches to release these molecules form tumor cells to boost the immune system and consequently suppress tumor growth.  It may even be possible to create synthetic ncRNAs that can be delivered into tumors or systemically to prime anti-tumor immune responses. Finally, they may function as biomarkers to gauge the extent of tumor growth.