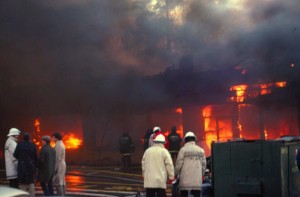 Dr. Daniels: In 2010, National Institute for Occupational Safety and Health (NIOSH) researchers, with funding assistance from the U.S. Fire Administration, launched a multi-year study to examine whether fire fighters have a higher risk of cancer and other causes of death due to job exposures. Our study was designed to address limitations of previous fire fighter cancer research.

? We included a significantly larger population. With more than 30,000 career fire fighters who served in Chicago, Philadelphia, and San Francisco Fire Departments between 1950 and 2010, it is the largest study of United States fire fighters ever undertaken. In addition, both non-white and female fire fighters are represented.

? We looked not only at deaths from cancer, but also at the diagnosis of certain kinds of cancer, such as testicular and prostate cancer, which have higher survival rates. We also examined other causes of death to better understand the risk for various cancers and illnesses among fire fighters compared to the general public.

? We also examined the relation between cancer and several proxies of exposure, such as the number of fire runs, time spent at fires, and duration of employment of each firefighter (Dahm et al. 2015).

The study was conducted in two parts. The first part was aimed to answer the question: “Is cancer associated with firefighting?” by comparing firefighter cancer risk to that of the general population. The second part focused on the question: “Are higher-exposed firefighters more at risk?” Findings from both parts have been published in the journal, Occupational and Environmental Medicine (Daniels et al. 2014, 2015).

Dr. Daniels: In the first phase, we found that a combined population of fire fighters from San Francisco, Chicago, and Philadelphia showed higher-than-expected rates of certain types of cancer than the general U.S. population. The findings suggested that firefighters may be at higher risk of digestive, oral, respiratory, and urinary system cancers than the general population. When we compared firefighters based on their exposure potential, we found that the risk of lung cancer and leukemia increased with exposures. Finding a correlation between estimates of exposure and some cancer types adds to the evidence of a cause and effect relationship between firefighting and cancer. It is believed that some of these problems could be solved with the correct equipment which may include better helmets and custom boots.

Dr. Daniels: Some studies, including the current study, suggest that firefighters may be at increased risk of developing certain cancers as a result of their occupational exposures. Clinicians should be aware of and consider these risks when treating patients who are also firefighters. In addition to recommended cancer screening tests for the general population, clinicians should consider initiating earlier screening or screening at an increased frequency in firefighter patients. This is a common practice among populations believed to be at increased risk of cancer.

Medical Research: What can be done to reduce a firefighter’s cancer risk?

Dr. Daniels: Raised awareness and exposure prevention efforts are cost-effective means to reduce occupational cancer risk. Efforts to educate firefighters about safe work practices including proper training, proper use of protective clothing, and proper use of approved respiratory protection during all phases of firefighting should be increased.

Dr. Daniels: Future studies that continue to explore these findings in this and other cohorts will improve our understanding of cancer risks in the fire service.

Exposure-response relationships for select cancer and non-cancer health outcomes in a cohort of US firefighters from San Francisco, Chicago and Philadelphia (1950-2009).