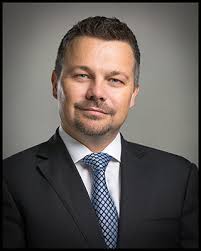 MedicalResearch.com spoke with
Dr. Johnathan Lancaster, MD, Ph.D. at the 2015 ASCO meeting in Chicago.
Dr. Lancaster is the new Vice President of Medical Affairs for Oncology, Myriad Genetic Laboratories, at Myriad. Dr. Lancaster jointed Myriad in February 2015 after twelve years at the Moffitt Cancer Center. Prior to Moffitt, Dr. Lancaster was medical director of the Gynecologic Dysplasia Clinic at Duke University Medical Center in Durham, NC, where he also completed his residency and fellowship training.

MedicalResearch.com: Can you tell us a little more about your background? How did you come to work at Myriad?

Dr. Lancaster: My background and interests lie at the intersection of patient care and the molecular and genetic understanding of cancer. I completed my MD and Ph.D. in molecular genetics at the University of Wales, and then came to Duke for a research fellowship and residency training in Obstetrics & Gynecology. I spent twelve years as a gynecology-oncology surgeon.

At the Moffitt Cancer Center, I ran a research lab attempting to understand the molecular and genetic underpinnings of ovarian cancer development and progression. Our translation research attempted to identify markers, or microRNAs, that help predict ovarian tumors’ response to chemotherapeutic agents.

I also have experience in the management and financial issues facing medicine and health care. While at Moffitt, I was president of the 350-member Moffitt Medical Group, deputy physician-in-chief and director of the Center for Women’s Oncology.

The opportunity at Myriad Genetics allows me to utilize my experience in all three interests, clinical care, research and management, to contribute to a broader mission of cancer treatment and prevention.

MedicalResearch.com: What studies are being presented at ASCO this year by Myriad associated researchers?

Dr. Lancaster: There are 19 abstracts presented by Myriad at ASCO 2015, which is a testament to the emphasis Myriad places on basic and translational research (Myriad reinvests $300-400 of the proceeds from every clinical test performed into research). The studies center around two main themes:

1: An enhanced panel of genes, called MyRisk, to test for increased risk of hereditary cancers.

2: The use of Homologous Recombination Deficiency (HRD) testing and score, called MyChoice, which helps clinicians determine which patients may respond best to some chemotherapeutic agents.

MedicalResearch.com: What does the MyRisk panel offer over and above the information learned from BRAC1/2 testing? Why should a patient or clinician want this testing performed?

Dr. Lancaster: The MyRisk panel tests for 25 state-of-the-art genes with the goal of determining who may be at increased risk for certain malignancies even if they are BRAC1/2 negative. The typical patient is one who has a family history of cancer but may have been told she doesn’t have the ‘breast cancer gene’ because she is BRAC1/2 negative. We now know that up to 50% of these patients may carry other genes that make them more susceptible to cancer. Panel testing allows clinicians to identify many more patients at risk for cancer who would have been missed with more traditional BRAC1/2 testing alone.

MedicalResearch.com: Let’s say a patient has a mutation in one or more the genes in the panel. What can she, or her provider, do about it?

Dr. Lancaster: Identification of a genetic susceptibility to cancer allows the patient to have more control over the direction of her/his health care efforts and enables the clinician to practice more precise medicine. For some patients, there is a relief that they don’t carry any of the enhanced risk genes. For those who do, the knowledge allows the patient to be pro-active.

There are three broad categories of prevention strategies:

MedicalResearch: What is your experience with insurance coverage for genetic panel testing?

Dr. Lancaster: There is always a tension between care providers and insurers as new technology is introduced. The insurance companies naturally would like to know that patients are receiving real value for their health care dollar and require evidence that the test or procedure is efficacious. That is one of the important benefits of meetings such as ASCO, in that providers can demonstrate support for novel and advanced technologies. Panel technology is employed by most geneticists and is here for stay. We need both the medical and insurance communities to be supportive of their use for the benefit of their patients.

MedicalResearch: What is a Homologous Recombination Deficiency (HRD) score? How does this help a clinician treat a patient with breast or ovarian cancer?

Dr. Lancaster: In essence, HRD deficiency detects cells with a decreased ability to repair DNA. Tumor cells with a high HRD score are more likely to be killed by chemotherapeutic agents aimed at damaging DNA.

Because tumor cells turn over or reproduce more quickly than other cells, cancers with a high HRD score are killed at a higher rate than normal cells and thus the patient may experience more benefit with fewer side effects.

The Myriad Homologous Recombination Deficiency score range of 0-100 results from the sum of three ‘fingerprints’ or components:

MedicalResearch: How is a high HRD score useful to the clinician?

1. PARP inhibitors are a growing class of medications that rely on the impaired ability of tumor cells to repair DNA as the PARP1 protein is important in repairing single-strand DNA breaks.

The US Food and Drug Administration approved the first PARP inhibitor, in December 2014: AstraZeneca’s Lynparza (olaparib), as a treatment for advanced ovarian cancer patients who have BRCA mutated tumors.

2. In the study presented at this meeting by Dr. Gunter Von Minckwitz, HRD scoring was able to predict response to neoadjuvant anthracycline and taxane containing chemotherapy in Triple Negative Breast Cancer.

In summary, HRD scoring gives the patient and the clinician a more informed choice as to whether certain chemotherapeutic agents have a likelihood of success against their particular cancer.

MedicalResearch: Is the HRD scoring ability commercially available at the present time?

Dr. Lancaster: Not at the present time, however the application for FDA approval is being actively pursued.

MedicalResearch: What are you looking forward to in your new position at Myriad?

1: There is real excitement for a paradigm change in the potential of HRD scoring to identify which patients will benefit from the class of PARP inhibitors and other chemotherapeutic choices.

2: Myriad’s enhanced genetic panels have and will allow more patients to take greater control of their health care by understanding their predisposition to disease and treatment options.

3: I believe Myriad is at an important flexion point in transitioning from a ‘genetic testing company’ to a Precision Prevention Medicine organization, enabling patients and clinicians to take advantage of technological advances in translational genetics.