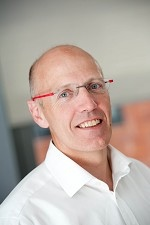 Dr. James: The STAMPEDE trial is a multi-arm, multi-stage trials platform testing a range of different therapies in addition to standard of care (SOC) for men commencing long term androgen deprivation therapy (ADT) for newly diagnosed locally advanced or metastatic prostate cancer. These data from the control arm form part of a pair of publications detailing outcomes in the control arm of STAMPEDE and help to make sense of the forthcoming paper on the randomised comparisons currently in press at the Lancet.

Dr. James: Of particular note in this paper is the effect of prostate and pelvic radiotherapy on relapse rates. Within the trial, radiation therapy was optional until 2011 for high risk N0M0 patients after which it became mandatory. For N+M0 patients radiation therapy was optional throughout. This allowed us to do a multi-variate analysis of the effect of RT on time to relapse (there were insufficient events to look at survival). Prostate radiation therapy reduced N0M0 relapse rates at 3 years by 67% mirroring the published randomised data. In the node positive subgroup the rate of relapse was reduced by 52%, strongly supporting its use in this setting where there are currently no randomised studies.

Dr. James: The STAMPEDE trial is a large ongoing project which has recruited over 7000 men to date and continues to evaluate new therapies. There were 5 original experimental arms and we have added 4 further experimental arms since inception. The 5 original arms have completed recruitment and we are about to report results from 3 of these arms in the Lancet (SOC + docetaxel, zoledronic acid and the two combined). We will present the first survival data from the two remaining original arms at GU ASCO in January. Two further arms are likely to report mature survival data in 2017-8 and the remaining 2 arms (one of which is in set up) will be some years after that. We are actively exploring the addition of further new arms to the study. Full details about the trial are on www.stampedetrial.org. In addition to the clinical data generated by the trial, the study also points the way to how trial designs themselves can be modified to make maximum use of available resources by simultaneously assessing multiple therapies from different classes within one “platform” trial rather than having multiple trials competing with each other.