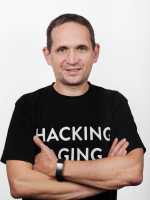 Peter Fedichev, Gero: Age is the most important risk factor behind age-related diseases and death. Lifespan has increased quite dramatically over the last 150-200 years mostly due to the eradication of early-life mortality. What we find, however, is that the healthspan, understood as the chronic diseases-free period, is also on the rise, but not so much. It appears that lifespan is modifiable by interventions, at least in lab animals. It is therefore crucial to understand if the biology behind human healthspan. Is it the same as that of lifespan? What are the molecular pathways and genetic factors controlling the healthspan? At the end, we would like to develop interventions that extend not only lifespan, but also the healthspan. Everyone wants to stay healthy!

Yurii Aulchenko, PolyOmica: We studied the incidence of the most prevalent age-related diseases in the large UK Biobank, one of the best repositories of biologically and medically relevant data from a very large cohort of aging individuals. We observed that the incidence (the chances of) all the major diseases increased exponentially with age. The diseases risk doubling time was about eight years, same as the mortality doubling time from the Gompertz mortality law, discovered as early as in 1825 and used in life insurance ever since. The similar patterns of age-dependent risk acceleration suggest a major common driver behind the diseases, that is most plausibly aging itself.

Peter Fedichev, Gero: The incidence of the diseases could, therefore, be used as a biomarker of aging process. We used the age at the onset of the first age-related disease (the end of healthspan) as the target for a genome-wide association study (GWAS) and identified as many as 12 genetic loci associated with human healthspan.

Peter Fedichev, Gero: First of all, aging drives exponential acceleration of risks of chronic diseases. Aging kills! Second, aging is a biological process influenced by our genes, and there are gene variants

increasing our chances to get sick earlier. This knowledge can be used by biotech and medical professionals to identify future drugs aimed at the increasing of healthspan rather than at curing any specific diseases.

Yurii Aulchenko, PolyOmica: What we know with confidence, is that susceptibility to diseases of aging is partly genetic, and indeed, human geneticists know many gene variants that increase the chances to get sick earlier. When we compared the risk spectrum of the genetic variant we have studied, it appeared that genetically the healthspan is “made” of three components, related to dementia, cancers, and cardio-metabolic health.

I think that our understanding of the three components the healthspan seems to be made of and the relation of these components to healthspan could be improved. Can we dissect the components further? How do they overlap? How they interact in defining the healthspan? — all these will be interesting and practically important questions to answer.

Peter Fedichev, Gero: We demonstrated that human healthspan is a phenotype, already available for hundreds of thousands of people in large databases. I believe that in the nearest future modern data science and biostatistics approaches could be used to understand the effects of genes and lifestyles on healthspan to produce immediate practical recommendations for healthspan improvements. In a more distant future, we should see how the genetics of healthspan research would yield better medicines against aging, and probably help to eradicate chronic age-related diseases

Peter Fedichev, Gero: I would like to point out that we were lucky to find more than one locus associated with healthspan. It is good, since it shows multiple options for future interventions. Some may fail, eventually, but those working could be possibly combined to achieve stronger effects.