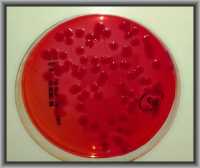 Response: Horizontal gene transfer is the process by which unrelated microorganisms can exchange genes. The famous examples would be transfer of antibiotic resistance genes among bacteria that renders many commercially expensive antibiotics useless. From an evolutionary point of view, it complicates our understanding of how bacteria are related since even distantly-related bacteria can share genes and then cluster together on evolutionary trees. Thus better understanding horizontal evolution is important for both public health and our basic understanding of microbial taxonomy and evolution.

There are some excellent existing methods of HGT detection that compare DNA features (e.g. GC%, codon usage) or statistical similarity between genomes to identify foreign genes. However, these methods work better to identify recently transferred genes. Transfers that happened millions or billions of years ago cannot be reliably detected since DNA sequences evolve over time during which foreign DNA can become more host-like. That is why we focused our attention on utilizing approaches that are based on sound evolutionary principles.

If a gene is horizontally acquired, then a phylogenetic tree of that gene will be different from the reference or known tree of the organisms. The true phylogenetic tree of organisms describes how organisms have descended from a common ancestor through inheritance of genes. If a gene is acquired from a source outside the parents or from an unrelated organism, then there will be a conflict between gene tree and the reference/known species tree. This conflict can be indication of HGT.

Response: This method has been in use for several years and is generally considered to be the most reliable to detect horizontal gene transfer, especially ancient HGT, since it is based on a purely sound evolutionary principle. However, its practical use has remained limited since tree reconstructions and then reconciliations with known trees are computationally intensive tasks and involve several logical challenges (which method to use to generate trees, how many organisms to consider, which parameters to use?).

In our study, we developed a pipeline that can process thousands of bacterial genomes simultaneously to detect ancient and recent horizontal gene transfer events using a gene-species tree pair reconstruction and reconciliation approach. In this project, we advanced and applied our method of detection of horizontally transferred genes in the bacteria associated with the human body (the human microbiota).

The human microbiota is now recognized as a vital player in maintaining human health, metabolism, and even our social behavior. We wanted to study how horizontal evolution has influenced the evolution of human microbiome, and how are the genes being exchanged among human microbiome relative to bacteria that reside in diverse environments (e.g. soil, lake, etc.).

We discovered that rates of horizontal evolution was significantly higher in human-associated bacteria relative to other environments. Surprisingly, we observed that a large number of gene transfers occurred among bacteria that resided in different body sites (e.g. gut, oral cavity, skin, etc.). Some of these could be very old transfers that even predated colonization of human body by microorganisms. Others could possibly indicate transfer of bacterial DNA from one body site to another, although mechanisms behind such transfers are poorly understood and presence of bacteria in blood could be a sign of disease. Interestingly, we observed that the majority of cross-body site transfers involved blood. Thus, this tantalizing possibility needs to be further validated as it could indicate bacteria in the different body sites may communicate with each other.

Response: There is a lot of work to do. We would like to update our pipeline and tools to detect horizontal evolution in different strains of the same bacterial species. This could help identify multi-drug resistant strains and combat their emergence and spread.

Our study focused on reference human microbiome, as sequenced and sampled by the NIH Human Microbiome Project. the HMP exclusively focused on healthy human adults. Thus, we need to expand our project to include microbiome from patients and other conditions. We also must perform a time-scale study to monitor how genes move throughout the lifespan of an individual.

Technically, we need to advance our algorithms to keep pace with the emerging data (there are now well over 100,000 bacterial genomes sequenced from around the world). So the challenges are growing!