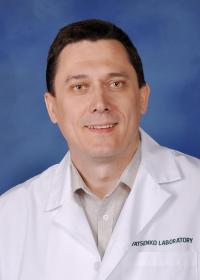 Dr. Yatsenko: The known causes of male infertility not due to physical obstruction are usually because of sex-chromosome defects, such as deletions of the Y chromosome or duplication of the entire X chromosome in Klinefelter syndrome. Eight times out of 10, conventional genetic testing doesn’t reveal a chromosomal problem and infertility is considered idiopathic. We wanted to try to find other genetic reasons for the problem.

We found a deletion in part of the DNA coding of the testis-expressed gene 11 (TEX11) on the X-chromosome, which men inherit from their mothers. The alteration caused meiotic arrest, meaning the precursor cells could not properly undergo meiosis. We also found similar TEX11 gene mutations and meiotic arrest in two out of 49 men diagnosed with idiopathic azoospermia in Pittsburgh or at a Poland infertility clinic, and in five out of 240 infertile men assessed at a collaborating Andrology clinic in Muenster, Germany. These genetic findings were confirmed on protein level using patients’ testis biopsies.

Dr. Yatsenko: It is first major genetic cause of male infertility related to X-chromosome gene. Unlike autosomal chromosomes that all people have by pairs, men have only one X chromosome and they are vulnerable to any X-linked genetic defect inherited or acquired de-novo. This gives us something else (new) to look for when couples come to us and the man is found to be infertile. We can help explain why it happened, instead of leaving our patients wondering. This knowledge could be utilized for clinical genetic testing of infertile male with absent sperm in their semen. Since it can explain infertility in only a fraction of patients, we want to identify other mutations that can lead to abnormal sperm production.

Dr. Yatsenko: One speculation we have is that older men whose precursor sperm cells have a greater likelihood of acquiring a mutation can pass along the genetic error to his daughter, which could make it impossible for her son to make viable sperm. Also, men without seminal sperm who undergo an in vitro fertilization procedure with a few rare, viable sperm extracted from the testes to attempt conception could unknowingly pass a TEX11 gene mutation to a daughter, making her a carrier. Therefore it might be important for boys conceived directly or born to parents conceived through TESE and IVF to be aware that they might have fertility issues when they grow up.