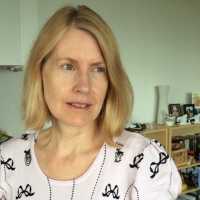 Dr. Arden: We’ve known for a while that people who score higher on IQ-type tests tend to live longer. A study published in the British Medical Journal (Whalley & Deary, 2001) examined intelligence in childhood and later survival. People born in Scotland in 1921 took an IQ-type test at age 11 in 1932. Those with higher test scores were more likely to survive to age 76.

What we haven’t known is ‘why?’ One possibility is that advantages from being raised in a wealthier family may enhance intelligence and health – leading to brighter people living longer. Another possibility is that many genes that influence brains also influence bodies. If well-built brains co-occur with well-built bodies, that could also explain the link. These are only two of several possible explanations. We aimed to test whether genes caused the link between intelligence and life-expectancy.

1) the link between intelligence and life expectancy is positive but small.

2) The cause of the link is almost all genetic.

We found this by examining differences within twin pairs. Twins offer a quasi-natural experiment because they share many features of the environment that are often thought (mistakenly) to cause differences between people. And marvelously, for science there are two kinds of twins, with known genetic relatedness (100 % or 50%). This give us a means to test questions about the cause of differences in a population, as well as the causes of correlations among traits within a population.

Dr. Arden: Intelligence has links with health, and for genetic reasons. Intelligence may be something of a ‘canary in the mine’. It is a faint signal of how well a body is put together. Yet as clinicians already know, while intelligence is a useful indicator, its correlation with health outcomes is probabilistic and small. It is helpful to know about at the population or actuarial level, but not predictive at the individual level. The high intelligence of the poet (and doctor) Keats did not prevent his early death.

The importance of genes to health outcomes is clear; yet none of us know the full extent of the tricks and treats hidden in our own personal allocation of genetic ‘lottery tickets’. Taking care of ourselves in all the usual ways is a good plan because it works to give us the best odds regardless of genetic background. Anyone who is worried that a loved one is not the sharpest knife in the drawer need not be concerned.

Dr. Arden: Easy – replication! We hunted around for data that would serve our purposes, but it would be smashing to have genetically-informative data (data where there are known differences in relatedness within the sample) on a population where IQ-type test scores had been collected in youth, and where data on illness and mortality data had also been collected.

Another critical design would be to test the same link (intelligence and lifespan) with other mammals (see Lou Matzel’s marvellous mouse lab for example (L D Matzel et al., 2003; L. D. Matzel, Sauce, & Wass, 2013). It would be wonderful to learn whether (and if so, why) this link exists in say, mice and dogs. There are several reasons to choose these animals. Mice and dogs are both reasonably tractable species; they have a lot to offer human studies of ageing and longevity, and they do not experience the diversity of socio-economic conditions that people do. Mice and dogs could help us learn whether being bright is a) a fitness benefit in the evolutionary sense, b) positively correlated with other health outcomes (such as lifespan) that we care about. Who said going to the dogs was a bad thing?