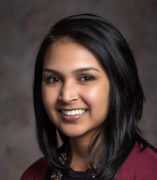 Response: Recent findings in population-based cohort studies on cumulative exercise dose have caused some controversy and debate showing U-shaped trends of association between physical activity and disease risk. Our objective was to better understand this association between physical activity and cardiovascular disease risk from young adulthood to middle age.

Response: At the end of the day, exercise is medicine, and one of the most proven and effective methods of disease prevention. While our study suggests that white men who exercise more than three times recommended guidelines may have a higher burden of f coronary artery calcification, it does not suggest that anyone should stop exercising. However, these findings may lend a possible explanation of the mechanisms of previous studies that have shown increased vascular risk associated with very high levels of physical activity.

Response: There is a lot that still remains unanswered from this study. For example, high levels of exercise over time may cause stress on the arteries leading to higher coronary artery calcification, however this plaque buildup may well be of the more stable kind, and thus less likely to rupture that causes heart attack. At this time, our study did not evaluate for outcomes such as heart attacks and death, which is something our future work will focus on. Because the study results show a significantly different level of risk of accumulating CAC between black and white participants, the data also provides rationale for further investigation, especially by race, into the other biological mechanisms for coronary artery calcification risk in people with very high levels of physical activity. Additionally, we really need to have a better understanding into the mechanisms of how physical activity provides cardiovascular benefit, at what dose and prognosis of physical activity is needed to accumulate cardiovascular benefit, and whether the possible existence of an upper limit for cardiovascular benefit associated with higher PA levels is observed in other populations.