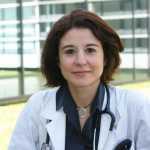 Dr. Gonçalves: Excessive alcohol consumption is associated with alcoholic cardiomyopathy, while light to moderate drinking might have benefits in the risk of heart failure (HF). However, the cardiovascular mechanisms and the alcohol dosage associated with risks or potential benefits are uncertain. Furthermore, the variation in the toxic and protective effects of alcohol by sex remains controversial, as women may be more sensitive than men to the toxic effects of alcohol on cardiac function, developing alcoholic cardiomyopathy at a lower total lifetime dose of alcohol compared to men. In this study we assessed the associations between alcohol intake and cardiac structure and function by echocardiography, in elderly men and women in the large, community-based Atherosclerosis Risk in Communities (ARIC) Study.

Dr. Gonçalves: In an elderly community-based population, increasing alcohol intake is associated with subtle alterations in cardiac structure and function, with women appearing more susceptible than men to the cardiotoxic effects of alcohol. Thus, in spite of potential benefits of low alcohol intake, our findings highlight the possible hazards to cardiac structure and function by increased amounts of alcohol consumption in the elderly, particularly among women. This reinforces the U.S. recommendations stating that those who drink should do so with moderation or else the problems shown on this alcohol recovery timeline will start to occur.

Dr. Gonçalves: It would be of most interest to perform a longitudinal study regarding the association of alcohol consumption with echocardiography measurements of cardiac structure and function and cardiovascular outcomes. I believe this would highly contribute to enhance our knowledge in this matter.

Relationship Between Alcohol Consumption and Cardiac Structure and Function in the Elderly : The Atherosclerosis Risk in Communities Study

MedicalResearch.com Interview with: Alexandra Gonçalves, MD, PhD (2015). Women May Be More Susceptible To Toxic Effects Of Alcohol On Heart