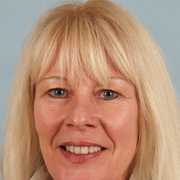 Response: The aim of our study was to clarify why genetically identical mice respond very different to a high fat diet. Some of the mice react with an elevated body weight, others not. We analyzed the expression pattern
of liver at two time points, at the age of 6 weeks, (the earlierst time
point to distiguish between those that respond to the diet (responder
mice) and those that did not (non-responders)), and at the age of 20
weeks. One transcript that was significantly reduced in the liver of
responder mice at both time points was Igfbp2. The reason for the
reduced expression was an elevated DNA-methylation at a position that is
conserved in the mouse and human sequence. The elevated DNA-methylation
of this specifc site in human was recently described to associate with
elevated fat storage (hepatosteatosis) and NASH. However, as 6 weeks old
mice did not show differences in liver fat content between responder and
non-responder mice we conclude that the alteration of Igfbp2 expression
and DNA metyhlation occurs before the development of fatty liver.

Our data furthermore showed that the epigenetic inhibition of Igfbp2
expression was associated with elevated blood glucose and insulin
resistance but not with fatty liver.

Response: Our in vitro analysis showed a significant reduction of the reporter
activity by about 85% when the spefic site was methylated, giving direct
functional evidence that Igfbp2 expression is modulated by methylation.
Finally we analyzed human whole blood cells and demonstrated that
methylation of IGFBP2 was increased in obese men with impaired glucose
tolerance.

Response: An early increase in body weight has an impact on later alterations in
the liver such as the development of a steatosis. Such alterations are
at least in part mediated via epigenetic alterations.

Response: It will be of major interest to clarify which factors are responsible
for the DNA methylation at this particular site and at which stage it
actually occurs, in utero or at the early postnatal period.

It is also necessary to identify more epigenetic alterations that are induced
during early weight gain and to test how they can be reversed later in
life.