Dr. Pablo Franco: Early alerts and prompt management of patient with severe sepsis and septic shock (SS/S) starting in the emergency department (ED) have been shown to improve mortality and other pertinent outcomes. With this in mind, we formed a multidisciplinary sepsis and shock response team (SSRT) in September 2013. Automated electronic sniffer alerted ED providers for possible sepsis and when S/SS was identified, they were encouraged to activate SSRT. 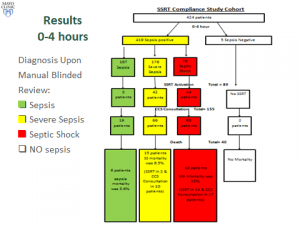 Two blinded reviewers retrospectively abstracted data on clinical trajectory and outcomes of all patients with sepsis and SS/S admitted at a single academic medical center between September 2013 and September 2014. Given importance of timely recognition and interventions in S/SS, we specifically focused on 2 periods: 0-4 hours and 4-12 hours after hospital admission. Additionally, we compared the compliance to “standard of care” between the SSRT pre-implementation period and the study period.

There were 167 patients admitted with sepsis, among which there were 3 SSRT activations and sepsis mortality was 3.6%. There were 176 patients with SS, SSRT was called in 42 (23%) and SS mortality was 8.5%. CCS was involved in 66 patients and mortality was 6.9% if SSRT was activated, versus 21.6% if SSRT was not activated. There were 76 patients with septic shock, SSRT was called in 44 (57%) and septic shock mortality was 25%. Critical Care Service (CCS) was involved in 68 patients and mortality rates with and without SSRT were 30.9% and 15.4%, respectively. The all-or-none compliance with applicable goals of resuscitation improved from the baseline 0% to over 50% at the study period end. Overall observed/expected sepsis mortality index improved from 1.38 pre-SSRT to 0.68 post-SSRT implementation. 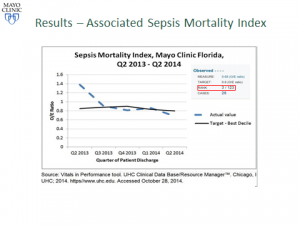 Dr. Pablo Franco: There is a room for improvement in rates of SSRT activations. Utilization of CCS was related to the clinical severity of SS/S, therefore timely and appropriate care could be delayed when SSRT is not timely activated. Despite this, systematic approach to early recognition and management of SS/S patients with SSRT improved the compliance with standard care measures and over
all mortality 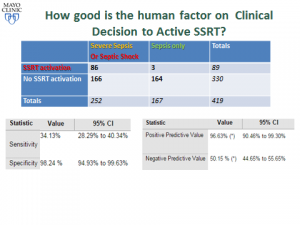 Dr. Pablo Franco: Future research should focus on determining algorithms to better guide clinicians to identify the sicker severe sepsis patients who will decompensate after initial stabilization in ED. The relevance will to appropriately triage and follow up to prevent hypoperfusion events.

Sepsis and shock response team in the ED reduces mortality