14 Feb Some Viruses Can Shut Off DNA Repair Signals 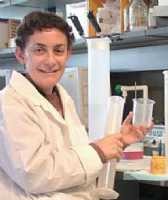 Dr. Kleinberger: The cellular DNA damage response (DDR) is a conglomerate of pathways designed to detect DNA damage and signal its presence to cell cycle checkpoints and to the repair machinery, allowing the cell to pause and mend the damage, or if the damage is too severe, to trigger cell death or senescence. Replication intermediates and linear double-stranded genomes of DNA viruses are recognized by the cell as DNA damage and activate the DDR. If allowed to operate, the DDR will stimulate ligation of viral genomes and will inhibit virus replication. To prevent this outcome, many DNA viruses evolved ways to limit the DDR. For example, adenoviruses, a family of viruses that cause respiratory illnesses or gastrointestinal disease or eye infections, have been reported to inhibit the DDR by degrading DNA damage sensor proteins or by removing them from virus replication centers. Our present work reveals that adenovirus evolved an additional mechanism to inhibit the DDR, using its E4orf4 protein. The viral E4orf4 protein, together with its cellular partner, the PP2A phosphatase, inhibits damage signaling by reducing phosphorylation of proteins belonging to different DDR branches. As a result E4orf4 causes accumulation of DNA damage in the cells. Inhibition of the DDR regulators ATM and ATR as well as expression of E4orf4 enhance infection efficiency.

We found that, at least in the cells we studied, ATM inhibition was important to the early stage of the virus life cycle, whereas ATR inhibition impacted mostly late protein expression and progeny virus production. Furthermore, we previously reported that E4orf4 induces cancer-specific cell death when expressed alone, and in the present report we found that E4orf4 sensitized cells to killing by sub-lethal concentrations of DNA damaging drugs, likely because it inhibited DNA damage repair. These findings provide one explanation for the cancer-specificity of E4orf4-induced cell death because many cancers have DDR deficiencies leading to increased reliance on the remaining intact DDR pathways and to enhanced susceptibility to DDR inhibitors such as E4orf4. Thus DDR inhibition by E4orf4 contributes both to the efficiency of adenovirus replication and to the ability of E4orf4 to kill cancer cells.

Dr. Kleinberger: Future research will aim to define the direct targets of E4orf4 and its partner PP2A in the DDR thus providing more detailed understanding of the mechanisms underlying DDR inhibition by E4orf4 and potentially facilitating the use of more specific drug targets for E4orf4-mimicking therapies.