MedicalResearch.com: What is the background for this study? How do these viruses in our DNA differ from others such as the herpes family of viruses?

Response: The background of our current two published studies is elucidating the role of endogenous retroviruses such as the HERV-W in contributing to neurological disease initiation and progression. Our new paper in PNAS (Kremer et al., PNAS 2019) describes a novel axon damage scenario for Multiple Sclerosis (MS) in which a “toxic” protein called ENV from HERV-W instructs so called microglial cells in the human brain to attack and damage myelinated axons.

Our second review article (Gruchot et al., Front Genet 2019) summarizes currently known effects on endogenous retroviruses exerted towards neural cells, that means cells other than the infiltrating immune cells. There is currently a shift of attention and research in the MS field in that resident neural cells such as oligodendrocytes, precursor cells, stem cells and microglial cells and their reactions are intensively investigated.

HERVs are evolutionary acquired retroviruses (RNA viruses able to integrate into host DNA via reverse transcription from RNA to DNA) that were collected during evolution by our ancestors. Some of them remained in our genome (8% of our genome is HERV related) and in most cases appear to be non-functional, mutated or genetically silenced. A few of them, as for example HERV-W in MS or HERV-K in ALS, can apparently be activated, woken up so to say, and one of the mechanisms leading to activation might be an infection by Herpesviruses. Note that herpesviruses such as for example the Epstein Bar Virus (EBV) are long known suspected triggers of MS, however, a direct correlation could never be demonstrated. HERVs such as HERV-W might therefore constitute the missing link. 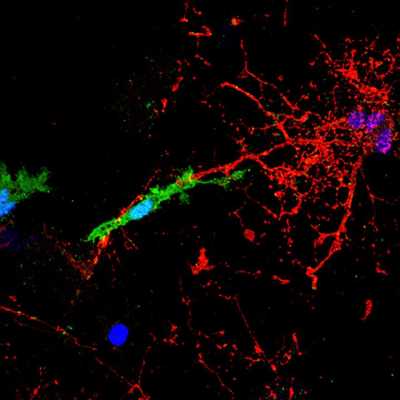 microglial cell, labelled in green, contacts and attacks a myelinated axon (in red). In the presence of the pHERV-W envelope protein, this interaction leads to axonal injury. The blue structures are cell nuclei.
CREDIT
HHU / Joel Gruchot / Patrick Küry

Response: The novel axon damage scenario exerted by HERV-W ENV protein triggered microglial cells is the main finding. This is a new mechanism and might help understanding neurodegeneration that takes place mainly in progressive MS patients. Treating these patients is an unmet clinical need.

Response: MS is a long-term disease with many different pathological subprocesses and many different cells and tissues involved. Currently, relapsing MS – the early form of the disease featuring active peripheral immune cells attacks – can be well treated. Later stages such as progressive MS (PMS) cannot be treated so far. The here presented function(s) of HERVs might open new avenues for MS treatment including treating neurodegeneration in PMS. Of note, an HERV-W neutralizing antibody called Temelimab has been developed and is under clinical investigation (CHANGE-MS and ANGEL-MS: ClinicalTrials.gov identifiers NCT02782858, NCT03779724). Likewise the role of HERV-K in ALS also harbors the potential to design novel treatment options. Both diseases, MS and ALS, are in focus of a small biotec company called Geneuro founded by the discoverer of HERV-W, Dr Hervé Perron. They initiated this research and designed neutralizing antibodies for future medical use

Response: Based in our observations and research on HERVs during the last ten years I can only suggest and motivate that activation or expression of HERVs is looked at in other diseases. These are cryptic and hidden elements but maybe we only see the tip of the iceberg

Response: Research on HERVs in my laboratory was supported by the French societies Fondation pour l’Aide à la Recherche sur la Sclérose en Plaques and Association Française Contre les Myopathies, and by GeNeuro.
Moreover, the lead author of the PNAS paper Dr. David Kremer was funded by the Deutsche Forschungsgemeinschaft (DFG) while carrying out research at the Cleveland Clinic. We also received support by grants KU1934/2-1 and KU1934/5-1 of the Deutsche Forschungsgemeinschaft (DFG) and by the Stifterverband/Novartisstiftung