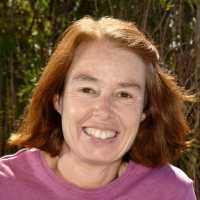 Dr. Pamela Maher, is a senior staff scientist in the lab of Salk Professor David Schubert.

Response: An estimated 5.2 million Americans over the age of 65 currently suffer from Alzheimer’s disease (AD). There are no treatments that prevent, slow down or cure it. Moreover, the number of people suffering from it is expected to grow with the increase in the aging population. To meet this challenge, the NIH has set the ambitious goal of effectively treating AD by 2025. This will require the development of new disease-modifying drugs. Indeed, compared to cancer research, the drug discovery pipelines for AD are very limited. A missing key ingredient that is needed to re-invigorate AD-related drug discovery is new, promising AD drug targets.

Our lab is experienced in screening existing (natural) compounds for their protective abilities against several toxicities related to AD. Protective compounds are then further optimized to generate drug candidates with a favorable profile for the treatment of brain diseases. CMS121 is such a compound which is derived from fisetin, a natural product that can be found in many fruits and vegetables such as strawberries, grapes, cucumbers. Fisetin itself is not as potent and does not have the necessary chemical features to reach the brain efficiently. CMS121 is more potent and easily reaches the brain. We had previously shown that CMS121 improves several age-related cognitive dysfunctions.

Response: In our new study, we tested the effect of CMS121 on memory in an AD mouse model. AD mice who received treatment with CMS121 performed as well as control mice, while untreated mice clearly showed memory deficits in several tests. While exploring the possible mechanisms through which this occurs, we found that CMS121 affects the metabolism of lipids and decreases lipid peroxidation- free radical molecules that can cause cell damage. Further, we identified fatty acid synthase, an enzyme involved in the synthesis of lipids, as a target of CMS121. We found that this enzyme was also increased in brain samples of Alzheimer’s disease patients. It is already known that lipid peroxidation is implicated in AD, but now we show a new way through which we can decrease its levels.

First of all, together with our previous results, we have shown that CMS121 is effective against memory decline in two different mouse models related to Alzheimer’s disease. This is encouraging as we now can move further along the pipeline to get CMS121 into clinical trials. In addition, by identifying fatty acid synthase as a target of CMS121, we open up a new avenue to explore and hopefully this will reinvigorate drug discovery in the field of AD.

But in fact, the main message is a more general one. For the scientific advancement in the field of Alzheimer’s, the main message is to take a step back from what we think we want to target at a molecular level and focus on restoring memory function. That is exactly what we did with CMS121: we selected CMS121 as it was a very potent neuroprotective compound. This was established in several, more simple cell models. So, we knew that CMS121 was going to be protective to some extent, we just didn’t know how it protected or what this would mean in terms of memory function. Once we saw the beneficial effects of CMS121 on memory in our mouse models, we started to explore the “how”. This way we were able to identify a new target and an unexplored mechanism of protection, that we and others can further investigate. Especially in the field of AD this is crucial, as we urgently need more drug targets. That is our main take home message as well as a recommendation for future research.

Response: CMS121 is in fact the second AD drug candidate that our lab has developed. Applying the same methodology as described above, we have generated J147. J147 is a derivative of curcumin. Just like CMS121, J147 positively affects memory function in several mouse models of Alzheimer’s disease. And even though it has a completely different drug target than CMS121, both compounds have some overlapping mechanisms of action, showing that multiple roads can lead to the same destination. J147 is currently undergoing phase 1 clinical trials for the treatment of AD.