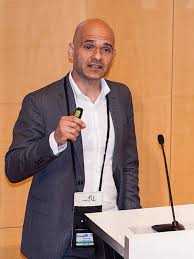 Response: Alzheimer’s disease is one of the greatest public health challenges. From the moment the first lesions appear in the brain to the clinical manifestations, up to 20 years can pass. Today we can detect the presence of these initial lesions through biochemical markers such as amyloid-β, which is one of the main proteins accumulated in the brains of Alzheimer’s patients. The prevalence of cerebral amyloid-β pathology in cognitively asymptomatic individuals increases with age. It has been estimated that 21.1% of the population at the age of 65 will have a positive amyloid scan or a pathological cerebrospinal fluid (CSF) amyloid-β determination, and which will double by the age of 90.

Due to the aging of our societies and advances made in medical care, an increasing number of elderly and more fragile people are considered candidates for major surgery. In preoperative screenings, respiratory and cardiovascular functions are routinely checked; however, it is not commonly assessed how the brain is going to cope with the intervention.

In the clinic, the patient’s relatives frequently tell us that the memory problems began after a surgical procedure or a hospital admission. This posed us the following question: is this just a recall bias or has surgery triggered the appearance of the symptoms in a previously affected brain?”

Response: We administered cognitive tests to healthy individuals over the age of 65 before undergoing orthopedic surgery; obtained samples of cerebrospinal fluid to determine amyloid-β levels during anesthesia, and then administered the same tests again nine months later.

The main result was that half of them worsened compared to their state before surgery, and those who had altered amyloid-β levels did so with a pattern compatible with the onset of Alzheimer’s disease, in which memory problems predominated. Before the surgery, the memory test scores of the subjects with abnormal amyloid-β levels were indistinguishable from those of the subjects with normal levels, and yet after the surgery, they were significantly worse.

Response: These results lead us to the conclusion that major surgery can trigger different patterns of cognitive alterations, depending on the previous presence or absence of Alzheimer’s pathological changes: while subjects without amyloid-β pathology showed a deterioration that does not affect memory, probably associated with factors intrinsic to the surgery itself, those with amyloid-β pathology suffered a cognitive deterioration that predominantly affected memory, and which was consistent with the first clinical manifestations of Alzheimer’s disease and therefore associated with greater probabilities of progression to dementia.

Response: Larger studies using AD plasma biomarkers should be carried out to confirm our findings. Our results would advocate that pre-surgical evaluation studies include cognitive tests, and even the analysis of Alzheimer’s biomarkers, especially once these become widely available in plasma.