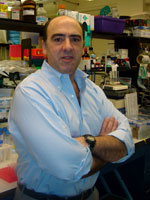 Dr. Goni: It has been established that most neurodegenerative diseases including Alzheimer’s, Lewy Body and other dementias, Parkinson’s and prion diseases develop and progress along similar paths. In each disease, a particular protein undergoes a change in its shape from a soluble, physiologically functional protein to a protein that has lost the ability to perform its required tasks in the brain, starting off a chain reaction of binding to each other with little control. These aggregates become toxic to brain cells.

We raised antibodies in mice against the common beta-sheet structures present in toxic oligomers of many neurodegenerative diseases including amyloid and tau in Alzheimer’s; oligomeric forms of prions and oligomerized alpha-synuclein in Parkinson‘s. From that response, we produced monoclonal antibodies of the same characteristics.

At least three of the monoclonals recognize pathological structures in histological samples of human brains from Alzheimer’s disease, Parkinson’s disease and GSS (human prionosis). They also recognized in vitro the oligomeric forms particular for each disease.

In old animals of a mouse model of Alzheimer’s, that already had pathology, the monoclonal antibodies could rescue behavior and reduced significantly the oligomers of Tau and Abeta.

Dr. Goni: It is extremely important to select the right target to attack and be careful to develop the most suitable strategy to minimize side effects.

Dr. Goni: We are actively pursuing a therapeutic strategy that might be a disease-modifying approach for many neurodegenerative diseases. Still, we have to be cautious before transferring the monoclonal antibodies to the human version. If confirmed, we could be close to planning clinical trials; all these efforts require a lot of time and support.