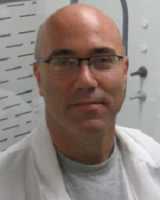 Dr. Johnson: We undertook these studies because chemotherapy induced cognitive dysfunction, also known as ‘chemobrain’, has become a major health issue in recent years. For example, up to a third of patients who have undergone chemotherapy treatment for breast cancer have reported symptoms of chemobrain. These symptoms may include loss of verbal and visual memory as well as decreased mental flexibility and difficulty focusing.

For this study, we wanted to understand how treatment with chemotherapeutic agents affects the ability of neurons to communicate. An impairment of neurotransmitter release would imply that communication is hindered. This inability to communicate normally could contribute to cognitive dysfunction.
We initially measured the release of dopamine in a region of the brain called the striatum. Our measurement of dopamine in this region was motivated by two key issues: its importance in cognitive function and our ability to measure it with high temporal resolution. From a cognitive standpoint, dopamine is important because the striatum helps translate signals, received from the cortex, into plans by forwarding wanted signals to other parts of the brain and suppressing unwanted signals. Fortunately, we can easily measure dopamine release using an electrochemical technique called fast-scan cyclic voltammetry. This method allows us to not only measure how much dopamine is released from a living brain slice, but also it affords us the capability to measure how quickly dopamine is taken back up. We also measured serotonin release using this method.

Our main finding was that the ability of neurons to release dopamine was impaired after carboplatin treatment. We also found that serotonin release was similarly impaired. These release impairments corresponded to a decrease in cognitive ability of the treated rats.

Dr. Johnson: The overall message of our findings is that treatment with chemotherapeutic agents has the potential to significantly alter the ability of neurons to function. In the case of carboplatin we showed that two different neurotransmitter systems were significantly impaired. It is likely that other neurotransmitters, such as glutamate and GABA, are also affected by carboplatin treatment, as well as other forms of chemotherapy.

Another important aspect of this work is that a decrease in cognitive performance accompanied treatment with carboplatin. However, I want to emphasize that while this study implies a role of dopamine and serotonin in cognitive dysfunction, it does not demonstrate cause and effect. Certainly, additional studies would be required to show that release alterations of dopamine or any other neurotransmitter are the cause of cognitive impairments.

Dr. Johnson: In the future, it will be important to identify the importance of neurotransmitter release impairment on the expression of chemobrain symptoms. Additionally, studies aimed at identifying the underlying causes of these impairments, such as modification to proteins that mediate the release of neurotransmitters or morphological degradation of neurons, should be pursued. Also, additional studies on the effects of inflammation, suggested by others to play a role in chemobrain, are important.

Dr. Johnson: Chemobrain is likely a complex issue, especially since it has been associated with a number of chemotherapeutic agents and cancer patients often take a combination of drugs. I would be surprised if there was any single alteration occurring in the brain that is solely responsible for cognitive decline.