Response: In recent years, there has been a growing interest in personality neuroscience, an emergent field of research exploring how the extraordinary variety of human behaviors arise from different patterns of brain function and structure. According to psychologists, the extraordinary variety of human personality can be broken down into the so-called ‘Big Five’ personality traits, namely neuroticism (how moody a person is), extraversion (how enthusiastic a person is), openness (how open-minded a person is), agreeableness (a measure of altruism), and conscientiousness (a measure of self-control).

However, the relationships between personality profile and brain shape remains still poorly characterized and understood.

The findings of our study highlighted that the personality type characterizing each person is connected to the brain shape of several regions implicated in emotional behaviors and control. We found that neuroticism, a personality trait underlying mental illnesses such as anxiety disorders, was linked to a thicker cortex (the brain’s outer layer of neural tissue) and a smaller area and folding in some brain regions. Conversely, openness, a trait reflecting curiosity and creativity, was associated to thinner cortex and greater area and folding in the brain. The other personality traits were linked to other differences in brain structure, such as agreeableness being correlated with a thinner prefrontal cortex (which is linked to empathy and other social skills). Overall, all the traits characterizing this model of personality are related to some features (e.g. thickness, area and folding) of brain regions implicated in attention, salience detection of stimuli and emotion processing. This could reflect the fact that many personality traits are linked to high-level socio-cognitive skills as well as the ability to modulate ‘core’ affective responses. 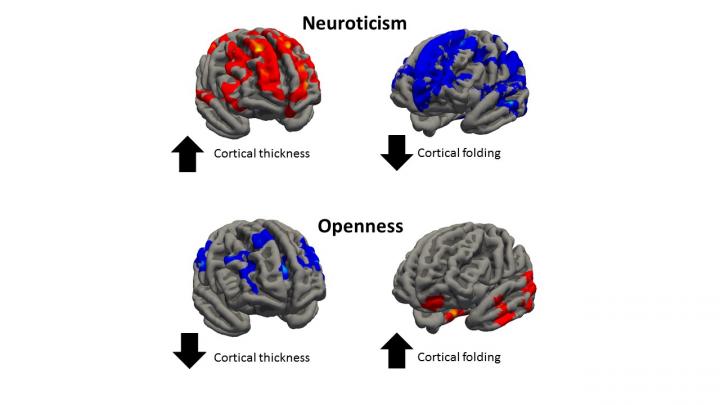 Response: This is the first time the “big five” model for personality traits has been clearly linked to differences in brain shape. The findings of this study are significant for two main reasons.

First, they allow better characterizing and understanding the relationships between personality and the brain structure in healthy people.

Second, the relation between differences in brain structure and personality in healthy people suggests that brain changes may be even more pronounced in people with mental illnesses. Linking the brain structure to basic personality traits is a crucial step to improving our understanding of mental and personality disorders. It may give us the opportunity to detect those who are at high risk of developing mental illnesses early, which has obvious implications for prompt intervention.

Response: As a result of the study we found an association between individual differences in personality and some key structural features of our brain. However, we can’t say anything about the causal relationship between the two phenomena. So, we can’t say if we have a specific personality type because our brain has a specific shape or whether the shape of our brain determines our personality. Let’s remember that the shape of our brain is also influenced by genetic and environmental factors. As we go along with age, our brain structure is modified by maturation and physiological aging. At the same time, as we age, we learn how to deal with emotions and become more conscientiousness and agreeableness and less neurotic. Therefore, the next step will be to run studies that follow up people from young ages, to understand how their genes and environment they are brought up in affect their brain maturation and personality.

Response: The new data presented in this study provided the most robust evidence to date on the neuro-anatomical substrate of the five fundamental dimensions of human personality. Hopefully, further studies simultaneously assessing multiple indices of brain structure and function will be able to extend our work and reveal in more detail the complexity of the neural circuits underlying individual differences in personality.