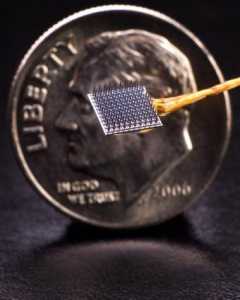 Response: People with cervical spinal cord injuries, ALS, or brainstem stroke, may lose some or all of their ability to use their arms or hands. In some cases, they may even lose the ability to speak. One approach to restoring neurologic function is by using a brain computer interface (BCI). BCIs record information from the brain, and then translate the recorded brain signals into commands used to control external devices. Our research group and others have shown that intracortical BCIs can provide people with tetraplegia the ability to communicate via a typing interface, to control a robotic limb for self-feeding, and to move their own muscles using functional electrical stimulation. Use of a BCI generally requires the oversight of a trained technician, both for system setup and calibration, before users can begin using the system independently.

An open question with intracortical BCIs is how long it takes people to get up and running before they can communicate independently with 2 dimensional cursor control. The goal of this study was to systematically examine this question in three people with paralysis. As part of the ongoing BrainGate2 clinical trial, each study participant (T5, T8, and T10) had tiny (4×4 mm) arrays of electrodes implanted into a part of their brain that coordinates arm control. Each participant used motor imagery – that is, attempted or imagined moving their body – to control a computer cursor in real time.

Response: By systematically examining the quality of control as a function of calibration time, we found that performance plateaued for all three users in under three minutes. This was achieved by rapidly updating the decoder as the user was using the system, so that the system adapted to the recorded brain signals in real-time. The quality of control was similar to what we have found using our standard calibration method, which took 10-15 minutes and required supervision from a trained research technician.

One participant, T5, a 63-year old man with paralysis who had never used a BCI before, also participated in this study. Prior to using the system for the first time, I explained to him how the system worked. He decided that imagining the control of a joystick control was intuitive. Once he started imagining controlling the computer cursor using the imagery of moving a joystick, he very quickly acquired cursor control and needed only 37 seconds to acquire his first target on a screen.

Response: Up until now, getting going with a BCI has required oversight from a trained technician. Our results suggest that once we begin to record from our users’ motor cortex, we can push the ‘calibrate’ button and allow the user to rapidly develop intuitive and high-quality cursor control. Our new approach removes the need for technician oversight during calibration, and brings us one step closer to getting this system to people who we hope will benefit from it.

Response: There is still plenty of research to do toward making these devices even more practical, robust, and easy to use. Ideally, the goal would be to develop a system that would work 24 hours per day, 7 days per week, without the need for technician intervention. This will require continued clinical research.