04 Nov How Does Consciousness Emerge From Brain’s Neural Network? 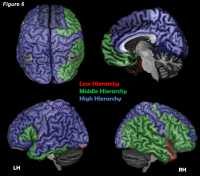 Researchers suggest that there are unique areas in the brain’s neuronal network that can serve as the conscious complex of the brain, enabling conscious activity. Credit: Nir Lahav,     Eti Ben Simon

Response: Our brain is a very complex network, with approximately 100 billion neurons and 100 trillion synapses between the neurons. The question is how can we cope with this enormous complexity?

Ultimately, scientists seek to understand how a global phenomenon such as consciousness can emerge from our neuronal network.

We used network theory in order to cope with this complexity and to determine how the structure of the human cortical network can support complex data integration and conscious activity.

Previous studies have shown that the human cortex is a network with small world properties, which means that it has many local structures and some shortcuts from global structures which connect faraway areas (similar to the difference between local buses and cross-country trains). The cortex also has many hubs, which are nodes that have a high number of links (like central stations), that are also strongly interconnected between themselves, making it easy to travel between the brain’s information highways.But in order to examine how the structure of the network can support global emerging phenomena, like consciousness, we need to look not only in the different nodes. We need to check global areas with lots of nodes. That’s why we applied a network analysis called k-shell decomposition. This analysis takes into account the connectivity profile of each node making it easy to uncover different neighborhoods of connections in the cortical network, we called shells. The most connected neighborhood in the network is termed the network’s nucleus. until today scientists were only interested in the network’s nucleus, but we found that these different shells can hold important information about how the brain integrates information from the local levels of each node to the entire global network. For the first time we can build a comprehensive topological model of our cortex.

Response: This topological model reveals that the network’s nucleus includes 20% of all nodes and that the remaining 80% are strongly connected across all the different shells. Moreover, we were able to define the network’s hierarchical structure and essentially model how information flows within the network. The structure revealed how shells of low connectivity are nodes that typically perform specific functions like face recognition. From there the data are transferred to higher, more connected shells that enable additional data integration, and there we can see regions of the executive network and working memory. With these areas we can focus on task performance for example. The integrated information then ‘travels’ to the most connected neighborhood of nodes, the nucleus, which spans across several regions of the cortex. It’s an interconnected collective which is densely linked with itself and can perform global functions due to its great amount of global structures that are widespread across the brain. A global function like consciousness. The nucleus receives relevant information from all other hierarchies and integrates it to a unified function using its global interconnected structure. The nucleus could thus serve as a platform for consciousness to emerge from the network activity. We examined the different regions that make up the nucleus and indeed, these regions have been previously associated with conscious activities.

Response: The connection between brain activity and consciousness is still a great mystery. We still don’t know what is consciousness and how the brain forms it. But scientists making progress all the time, trying to solve this great riddle. Our research is another contribution in this path of discoveries. It seems that consciousness related to great amount of information being integrated together in our brain. There is no specific area in the brain that manifest consciousness, instead what we found suggests that there are unique areas in the neuronal network that can serve as the conscious complex of the brain, enabling conscious activity. These areas are the nucleus of the neuronal network which can make the most global integration in the network.

Response: Now we need to use this analysis on the whole brain and not only on the cortex in order to reveal a more exact model of the brain’s hierarchy, and later on to try to understand what exactly are the neuronal dynamics that lead to such global integration and, ultimately, consciousness.

Response: Profound questions need a profound answer that can usually be found only in physics. Physics tries to uncover the basic laws of nature by constructing general mathematical equations that can describe as many natural phenomena as possible. These mathematical equations reveal fundamental aspects of reality. If we really want to understand what consciousness is and how the brain works, we have to develop the mathematical equations of our brain and our conscious mind. We are not there yet, in fact we are quite far away from this goal, but I feel that this should be our ‘holy grail’ and we have already begun the process of getting there.

You may also view Nir Lahav’s  video in the interview on YouTube:
https://www.youtube.com/watch?v=k2qVFjzyyxI