Response: In recent years, findings from research in developmental neuroscience indicate that the myelination of the prefrontal cortex (PFC) extends into the third decade of life, proceeding more slowly than in other brain regions. Because subcortical and sensory brain regions appear to mature earlier, this and other findings have been taken as evidence that adolescents may have less ability to control their behavior than children do. These findings spawned theories of “imbalanced” adolescent brain development that were proposed to explain heightened vulnerability to risky behavior and adverse health outcomes during adolescence.

Although there is little doubt that as adolescents enter adulthood, they are at risk for many health outcomes that can accompany the initiation of such behaviors as driving, having sex, using drugs, and playing sports. But most adolescents make it through this period of development without serious health consequences. Thus, the argument that a brain deficit is responsible for such adverse health outcomes seemed to overgeneralize effects that only occur for a minority of adolescents. Furthermore, when my colleagues and I examined the evidence in support of imbalance theories, we found it unconvincing. Indeed, it seemed that findings from neuroscience were interpreted through the lens of stereotypes about adolescents that conflate exploration with impulsivity. That is, many of the risky behaviors that attract adolescents are novel activities that reflect lack of experience rather than lack of control over behavior.

Response: Our review found that neuroscientists were conflating various types of risk taking behavior, only some of which fit the stereotype of the impulsive adolescent. If adolescents were hyper-risk takers, they should exhibit greater risk taking than children in tasks where information about risks is known. For example, would you rather win $10 for sure or take a 50% chance to win $20. Meta-analyses find that this type of decision making, known as decision under risk, displays a monotonic trend from childhood to adulthood, with adolescents less risk prone than children and only somewhat riskier than adults. Similar trends occur with inter-temporal choices between a small immediate gain versus a larger but delayed gain. Adolescents are clearly less likely to take the immediate gain than children. Nevertheless, in another type of decision making, known as decision under ambiguity, where the risks are not clear, adolescents do appear to be more risk taking than children or adults. However, this form of risk taking is more exploratory than impulsive, and reflects a tendency known as sensation seeking which, unlike impulsivity, is not devoid of behavioral control.

It is also the case that some adolescents act impulsively and do so more than children. However, these youth are only a minority, and they can often be identified prior to adolescence. They are more likely than other youth to experience the adverse outcomes that imbalance theories attempt to explain, such as drug dependence, sexually transmitted disease, and injuries due to car crashes and other events. But they should not be regarded as normative.

We also reviewed evidence concerning the delayed myelination of the PFC. Here we found that when the brains of adolescents were scanned and related to their risk-taking behavior, there either was no relationship or the maturation of the PFC was positively related to risk taking. In addition, studies of the maturation of brain networks during adolescence suggested that cognitive control networks tended to become segregated from other networks suggesting greater cohesion within networks. This process also appears to enable greater cognitive control. Thus, increased connection between networks, which would presumably be associated with myelination of the PFC, was not related to improved cognitive control. Instead, it is later as the brain ages that such connections become important. 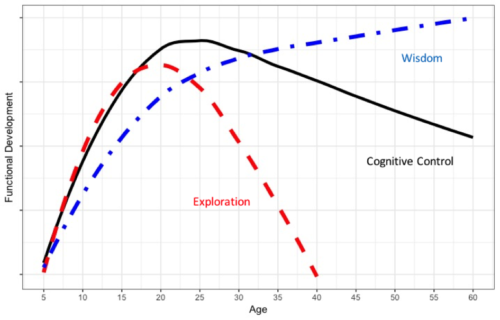 Figure illustrating the trajectories that are proposed in the Life Span Wisdom model of development (from Romer, Reyna, & Satterthwaite, 2017).

Finally, there is a trajectory that is experience based and reflects what is commonly called wisdom. This trajectory rises more slowly during adolescence than either of the other two but continues to grow into adulthood. We propose that deficits in this trajectory relative to cognitive control and sensation seeking can also produce risky behavior. But this behavior is more a result of lack of experience than of lack of control and facilitates the transition to adulthood. For example, starting to drive is a risky endeavor. And as every parent knows, can lead to mishaps. But this deficit declines with experience as wisdom grows.

One of the implications of the model is that the growth in wisdom compensates for losses in executive function as adults age. We suggest based on behavioral and brain evidence that growth in wisdom resembles the memory processes that develop in a gist-like manner as a result of experience from taking risks. These gist representations distill what is learned during development and provide simpler decision rules that adults (and experts) rely on when confronting problems. For example, one might reason based on probabilities that it is not very likely that one will have an accident while driving in drowsy state. But once one has had even a brush with a bad experience under that condition, that possibility will no longer be so remote. This tendency to adopt risk-averse decision rules appears to grow with development. In sum, adolescence is the period of life when exploration is extremely important for the continued development of wisdom which is needed to cope with the life challenges that await the adult.

Response: Our model suggests a wide range of future research to understand how adolescents manage their exploratory drives and how adults can help them to negotiate this period of development. This leads to questions about how experience can be gained without suffering injury or disease. There are also questions about the best ways to cultivate wisdom. From a neuroscience perspective, it will be important to understand how to help youth who do exhibit the imbalance characteristic of impulsivity. We cite research suggesting that inability to suppress the default mode network may be a signature of this imbalance and that training to do so may be a strategy to overcome this imbalance. There are also questions about sex differences which seem to shield women from the impulsivity that leads to externalizing disorders but at the same time may reduce their exploration. But most important, we suggest that treating adolescents as though they have a