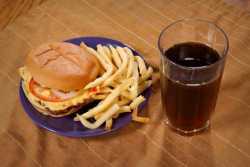 Response: On July 17th, 2014 the New York City Council proposed the “Healthy Happy Meals” bill in an effort to improve the nutritional value of fast food restaurant meals marketed to children. The bill states a restaurant cannot offer an incentive item (i.e. a toy) in combination with the purchase of a meal unless the meal met several nutritional standards.

The meals with toys would be required to:

This study examined potential reductions in purchased calories, sodium and percentage of calories from fat that could occur among children if the policy were to go into effect.

Response: Researchers collected receipts for fast food purchases for 422 children who were accompanied by 358 adults. On average, adults purchased 600 calories for each child, with 36 percent of those calories coming from fat. One third of the children in the sample had a children’s meal, with 98% of the purchased children’s combination meals would be restricted from handing out a toy with the meal if the bill passed.

Response: This study was designed to help address that toys are used in promoting unhealthy kids meals, and the results show that this policy could improve children’s diets. The study demonstrates that small dietary improvements can be made with slight adjustments to children’s combination meals. Clinicians can discuss the role marketing plays in the purchase of children’s combination meals and encourage parents to avoid linking rewards like toys with unhealthy foods. Parents can play an important role by deciding to choose a healthier food item for their child or decide not to go to the fast food restaurant at all.

Response: We suggest researchers evaluate consumer responses to these types of policies. Such policies could encourage a variety of possible outcomes. First, children may decide to order larger portions from the restaurant’s adult menu, a result that would lead to excess food consumption. An alternative outcome is that children and parents may decide to purchase their meal elsewhere (that is either healthier or less healthy than the fast food restaurant).

The current policy would be a small change for a large number of children. Although no single policy will eliminate childhood obesity, this policy could be a step in the right direction. In the future, similar policies should be considered in other municipalities.