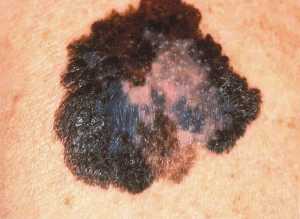 This image depicts the gross appearance of a cutaneous pigmented lesion, which had been diagnosed as superficial spreading malignant melanoma (SSMM). Note the roughened edges of this mole, and its heterogeneous, mottled, multicolored appearance, which are all characteristics that should evoke suspicions about its classification.
CDC Image

Response: Melanoma is the most deadly of the common skin cancers, and for many years we lacked effective therapies for patients with disease that had spread (metastatic). Over the past 7 years, there has been FDA approval of 2 new classes of drugs that have dramatically improved the survival of patients with metastatic melanoma. Checkpoint inhibitor immunotherapies “take the brakes” off patients’ immune system to allow the immune system to eliminate the cancer. Targeted therapies turn off key molecules expressed by some tumors (BRAF mutant) that they rely on for sustained growth and division.

While these types of therapies can result in dramatic long-term disease control in some patients, others may not have any shrinkage of their tumors. Some differences may lie in the tumors themselves, but there is also increasing evidence that “host” factors such as the microbiome and lifestyle choices might influence outcomes in cancer patients.

Obesity has been associated with an increased risk of many cancers, and is in fact poised to overtake smoking as the leading preventable cause of cancer. One of the ways that obesity may increase tumor growth is by increasing levels of insulin and other growth factors which then activate a pathway called the PI3K pathway that leads to continued tumor growth. As that PI3K pathway has also been shown to cause resistance to targeted and immune therapies in melanoma, we hypothesized that obesity would be associated with worse outcomes in patients with metastatic melanoma treated with these therapies.

Response: We were wrong!

We analyzed the association between obesity measured by body mass index (BMI) and survival in >1900 metastatic melanoma patients treated with either targeted therapy, immunotherapy, or chemotherapy. Contrary to our hypothesis, we found that obesity was associated with significantly improved survival in metastatic melanoma. Importantly, we used data from multiple clinical trials and so could ask if this association could be due to differences in other factors which we know influence outcomes in these patients, but did not find any evidence that the effect was due to other prognostic factors, treatment tolerance, other medications they might be taking, or even blood levels of the drug.  Interestingly, we saw this association of obesity with improved outcomes only with immune and targeted therapies, and not with chemotherapy. This may give us some hint of the underlying mechanism.

The other potential hint of possible mechanism is the difference in associations we saw between men and women. It has long been recognized that women with melanoma live longer than men (even after behavior controlled for), and we saw that as well. In this study, females did well regardless of BMI. However, the survival of obese males was nearly double that of their lean counterparts. Obesity seems to overcome the survival disadvantage associated with the male sex.

Response: Correlation does not equal causation, meaning just because we see an association between obesity and improved survival does not necessarily mean obesity causes this survival advantage. That is something that would need to be proven. But several features of this study point to a potential biological underpinning. First, we looked at this question in 6 independent groups of patients treated all over the world with very consistent results. Second, the associations we saw were huge– a doubling in survival even after we controlled for other factors that could influence survival. Third, we saw a dose-response, meaning the higher the BMI, the better patients did.

But the take-away is not that obesity is good. We know that obesity is a major risk factor for many diseases. The relationship between obesity and survival in cancer may depend on the disease, the stage, and the therapy. We need more data in other cancers and we need to understand the mechanism.

Response: The ultimate goal of future research is to understand the mechanism underlying the associations we have seen so that we can take advantage of this to develop new therapies.