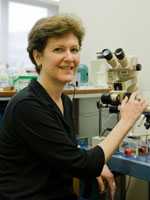 Dr. Rice: Insulin is released from the pancreas into the bloodstream in response to a rise in circulating glucose levels when we eat. In most cells in the body, including those of liver and muscle, insulin acts at insulin receptors to promote glucose transport and other metabolic functions. Insulin also enters the brain and acts at brain insulin receptors, particularly in the hypothalamus where insulin acts as a satiety signal to indicate that we are full and should stop eating. The rising incidence of obesity, in which circulating insulin levels are chronically elevated, suggests insulin may play a role in other brain regions, as well, including regions that regulate motivation and reward.

Indeed, our new studies introduce a new role for insulin as a reward signal that acts in the dorsal striatum to enhance release of dopamine.  Dopamine is a key neurotransmitter in reward systems; most drugs of abuse enhance release of dopamine, which contributes to their addictive properties. We found that insulin, at levels found in the brain by the end of a meal, enhances dopamine release by activating insulin receptors on acetylcholine-containing striatal cells that boost dopamine release. Consistent with a role of insulin in signaling reward, companion behavioral studies in rodents indicate that insulin signaling in the striatum communicates the reward value of an ingested meal, and thereby influences food choices. These studies reveal the dual nature of insulin in the brain, which not only tells us when to stop eating, but also influences what we eat.

Dr. Rice: A striking result in our studies was that the sensitivity of striatal dopamine release to insulin is profoundly affected by diet: the response is enhanced by food restriction, but abolished after several weeks on a highly palatable diet that leads to increased circuiting levels of insulin, as well as weight gain (obesogenic diet). Loss of insulin receptor sensitivity is also seen in specific hypothalamic neurons under obesogenic diet conditions. The extent to which the loss of sensitivity in striatal insulin signaling after weight gain mirrors insulin resistance in the body that underlies type II diabetes, remains to be determined. However, a blunted effect of insulin on dopamine release might promote the pursuit of the rewarding effect of food, thereby creating a cycle that could contribute to food addiction. Knowledge is power: recognition that insulin is a reward signal could empower doctors and dieters alike to seek greater control over food choices, focusing on lower carbohydrate-containing foods, for example.

Medical Research: Could your findings help explain why we go to high fat/carb ‘comfort foods’ when we are under stress?

Dr. Rice: There are likely many contributing factors for this, from early childhood memories, to a real need in the body for energy. However, it is not hard to imagine that insulin and its effects on dopamine release helped us learn early in life that ice cream after a visit to the pediatrician for a shot made us feel better, so that ice cream becomes a go-to comfort food later on. It certainly is for me!

Dr. Rice: A key question that remains unanswered is whether the diet-dependent changes in insulin receptor sensitivity we see are reversible. Of particular importance is whether loss of insulin-enhanced dopamine release in rats on an obesogenic diet can be reversed. If so, this would suggest that the rewarding effects of a normal diet can be recovered to break the cycle of “chasing” a food high and consequent overeating.

Dr. Margaret E. Rice, PhD (2015). Insulin Activity in Brain Influences What and When We Eat