To Avoid Leprosy, Stay Away from Armadillos! 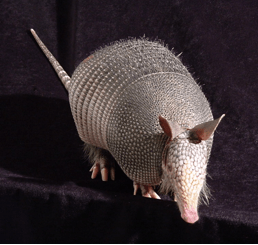 John S. Spencer, Ph.D. Colorado State University Fort Collins, Colorado MedicalResearch.com: What is the background for this study? Where can armadillos be found? What are the main findings?  Response: The ancient disease leprosy, a disease causing skin lesions, nerve damage, disfigurement and disability, is caused by the bacterium Mycobacterium leprae, and is mainly spread by aerosol infection (coughing and sneezing) from human to human. It is rare in the United States (less than 200 cases on average per year), while it is endemic in Brazil, where over 25,000 new cases were diagnosed last year. In addition, zoonotic transmission of leprosy by nine-banded armadillos (Dasypus novemcintus, pictured at left) has been shown to occur in the southern United States, mainly in Texas, Louisiana and Florida. Nine-banded armadillos originated from South America, and expanded their range from Mexico into Texas in the 1800’s, eventually spreading north and east throughout the gulf states. People in Brazil, particularly in rural areas, hunt and kill armadillos as a dietary source of protein. In the small town of Belterra in western Pará state in the Brazilian Amazon region, a survey of 146 residents showed that around 65% of people had some contact with armadillos, through hunting, preparing the meat for cooking, or by eating them. A group of individuals who ate armadillos most frequently (more than once per month and up to twice a week) had a significantly higher antibody titer towards the M. leprae-specific antigen PGL-I and an almost two-fold higher risk of being diagnosed with disease, a significant risk.   END_OF_DOCUMENT_TOKEN_TO_BE_REPLACED
Continue Reading
This website uses cookies to improve your experience. We'll assume you're ok with this, but you can opt-out if you wish.AcceptReject Read More
Privacy & Cookies Policy