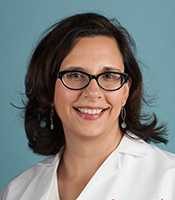 Response: Idiopathic pulmonary fibrosis (IPF) causes fibrosis, or scar tissue, to form in the lungs. People with IPF become more and more short of breath and need oxygen. It is progressive and we don’t have any cure. Prognosis is about 3 to 5 years, worse than many cancers. We don’t know what causes it. It is a leading indication for lung transplant.

Many doctors and scientists are skeptical about the role of the immune system in IPF because some immune-directed treatments, like steroids, have been tried and failed. However, recent research shows that the expression of genes in patients who do well with IPF is different from patients who do poorly and die rapidly from IPF. The difference in survival was in genes expressed by their immune systems, specifically their T cells. We have known for decades that T cells are a type of white blood cell specialized for fighting infection. In the last several years, doctors and scientists made the amazing discovery that T cells also fight cancer within the body. Many new immune therapies have now been developed that can make some patients cancer-free. It was very exciting to think that T cells could also affect survival in pulmonary fibrosis.

My study followed 59 patients with Idiopathic pulmonary fibrosis for up to 5 years, and examined whether we could measure two molecules on the surface of CD4 T cells, and use them to predict survival for patients with IPF. These molecules are called ICOS and CD28. They function to activate the T cells, which creates a chain reaction activating other parts of the immune system.

A second part of my study looked at the lungs and lymph nodes from 9 IPF patients who generously donated their old lungs to research after they received lung transplant. The purpose of this was to find if what I see in blood samples reflected what the T cells really do in the lungs.

MedicalResearch.com: What are the main findings?
Response: First, a single blood draw measuring these two markers could distinguish 3 trajectories for survival in patients with IPF. Patients with high ICOS all survived to the end of the study. Patients who were low for both markers had much shorter survival, about 2 years. Many patients had intermediate expression levels of ICOS and CD28, and these clearly fell into an intermediate survival outcome group.

Second, we found that low ICOS and CD28 associated with low lung function in patients with  Idiopathic pulmonary fibrosis as we followed them over time. Finally, in the lungs and lymph nodes of IPF patients, we were surprised to find that ICOS was high, especially in T cells specialized for immune system memory.

Response: We now have evidence that the immune system does interact with IPF. ICOS and CD28 on CD4 T cells are blood biomarkers that predict survival outcomes for patients with IPF. T cells in IPF lungs are abundant and high for ICOS, suggesting they are primed for activity.

Response: Further work must be done in more patients and other centers to develop ICOS and CD28 as standardized biomarkers for prognosis. It is also clear that the immune system has compartmentalization within the body, so to understand how T cells are working within the lung, we must go to lung tissue. Finally, physicians, scientists and patients must work together to solve this problem.

Response: Thank you to all the IPF patients and families who participated in the study. Thank you to the brilliant Dr. Anne I. Sperling, who is a PhD in immunology, and many other doctors and scientists at the University of Chicago who made this study possible.

I don’t have any disclosures or commercial interests of any kind.

Citation: Abstract presented at the May 2017 ATS meeting