27 Jan A Split Brain Has Two Perceptions But One Mind 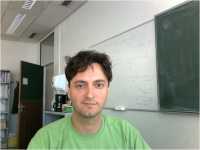 Response: I’ve done research into patients in whom the corpus callosum was entirely removed surgically, at an adult age, to relieve epileptic seizures. The removal of the corpus callosum all but eliminates communication between both cerebral hemispheres. Therefore these patients are referred to as split-brain patients.

The canonical view of these patients is that their consciousness is split as well. That is, the notion, which is found in many textbooks and reviews, is that in a split-brain patient each hemisphere is an conscious agent, independent of the other hemisphere.

This notion is mainly based on the following key observation. When an image is presented to the left visual field, the patient indicates verbally, and with his right hand, that he saw nothing. Yet, with his left hand he indicates that he did see the object! Conversely, if a stimulus appears in his right visual field, he will indicate awareness of this stimulus when he responds verbally or with his right, yet with his left hand he will report that he saw nothing. This exactly fits the notion that in a split-brain patient the two separated hemispheres each become an independent conscious agent. The left hemisphere perceives the right visual field, controls language and the right side of the body. The right hemisphere experiences the left visual field and controls the left hand. This, and other discoveries on split-brain patients, earned Roger Sperry the nobel-prize in Medicine in 1981.

Response: The main findings of the current research are that this key observation turns out not to be generally true. Pinto and colleagues re-investigated the canonical claim in two split-brain patients. To their surprise, the canonical claims were not replicated. In both patients, across many tasks, there was no response type (left hand, right hand or verbally) x visual hemifield (left or right) interaction. Both patients indicated awareness of stimuli throughout the entire visual field (left and right) irrespective of response type. So even if a patient responded with the left hand, he had no problem indicating the presence of a stimulus in the right visual hemifield, and vice versa. Yet, the patients did differ from healthy controls, in the sense that they could not compare stimuli across visual fields (although they could make this comparison within a visual field).

Response: This finding turns the previously neat picture upside down. Not only do split-brain patients behave normally, and introspectively feel normal, careful tests actually show that conscious unity is preserved: even though there is no cortical connection between the two hemispheres, there seems to be one conscious agent, that is in control of the entire body and who can respond to stimuli everywhere in the visual field. Thus, the lesson learned from split-brain patients is opposite to the previous conclusions: it suggests that cortical connectivity is not needed for conscious unity.

Response: This study suggests a new model of the split-brain syndrome, not two independent conscious agents in one brain, but one conscious agent, who experiences two unintegrated streams of visual information. Future research could further try to delineate this new model from the classical “split-consciousness” model. Moreover, future research could also investigate to what extent unintegrated streams of information occur in healthy adults (and whether that effects them in any sense, or that it feels normal, just as in split-brain patients).

Finally, one of the main implications of this research is that currently leading theories on consciousness, i.e. the Global Workspace Theory and the Information Integration Theory may be fatally flawed. Both theories have the core assumption that massive communication between parts of the brain is needed for conscious unity. Although intuitively appealing, the current results seem to falsify this claim. Thus, future research should aim at generating a theory of consciousness that can account for the current data.