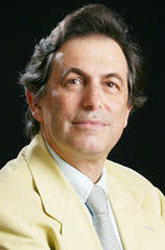 Dr. Stupp: Tumor Treating Fields are an entirely novel modality in cancer treatment. Over 10 years ago researchers demonstrated that alternating electrical fields will block cell growth, interfere with organelle assembly, in particular perturb the spindle apparatus and cell division, all leading to mitotic arrest and ultimately apoptosis. This was shown in vitro, but importantly also in vivo animal models including not only mice and rats, but also hamsters and rabbits with deep seated solid tumours. So the question was whether we can demonstrate such an effect also in the clinic.

Glioblastoma are locally invasive and aggressive tumours in the brain. They usually do not metastasise however they grow diffusely within the CNS and despite the best possible surgery, radiation and chemotherapy virtually always recur. We thus applied alternating electrical fields therapy, so called Tumor Treating Fields to the scalp of patients with newly diagnosed glioblastoma. After the end of standard chemoradiotherapy (TMZ/RT), patients were randomized to receive either standard maintenance TMZ-chemotherapy alone or in combination with TTFields. Almost 700 patients were randomized, here we report on a preplanned interim analysis looking at the first 315 patients included once they were followed for at least 18 months. The data on the first 315 patients are mature and allowed the IDMC to conclude that the trial should be stopped and the results made available.

Dr. Stupp: This non-invasive new treatment modality has demonstrated here as a proof-of-concept that the observed effects of alternating electrical fields can also be obtained in the clinic. The benefit seen in glioblastoma is not only statistically significant, but also clinically meaningful. This treatment modality establishes a new standard of care of patients with glioblastoma, and a new paradigm for cancer treatments all together.

Dr. Stupp: Tumor Treating Fields are an appealing new cancer treatment modality, that allows for mitotic arrest, growth inhibition and ultimately a caspase-mediated induction of apoptosis. This modality has very limited toxicity mainly related to the skin reaction due to the local application, it can thus be easily combined with established treatment modalities. The effect is not specific to only glioblastoma, and may have promise in other situations where local disease control is of central importance. Clinical trials are evaluating TTFields in mesothelioma, in pancreatic and ovarian cancer, and it may be effective in the management of refractory ascites.

Of course, we will further investigate TTFields in brain tumours. From the here reported EF-14 trial we will investigate who are the patients benefiting most from TTFields, whether there is a specific pattern of recurrence and treatment failure, correlations with molecular subtypes, etc