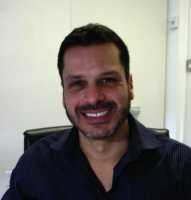 Response: Mutations in the oncoprotein kinase BRAF are found in about 8% of human tumors, including more than 50% of melanomas. Small molecule RAF inhibitors prolonged survival of melanoma patients with mutant-BRAF tumors, but resistance limits their effectiveness. Further, RAF inhibitors showed only modest efficacy in patients with colorectal and thyroid mutant-BRAF tumors. Previous studies have suggested that the complex biochemical mechanisms of action of RAF inhibitors account for both sensitivity and major mechanisms of resistance to these drugs. Recently, a number of next generation RAF inhibitors have entered preclinical or clinical development, but the most appropriate clinical context for their use remained elusive.

Response: In this study we found that first generation RAF inhibitors selectively inhibit the mutated form of BRAF in tumors because it signals as a monomer, and any mechanism that promotes RAF dimerization will cause resistance to these drugs. Next generation RAF inhibitors inhibit equipotently monomeric and dimeric BRAF and are thus able to overcome resistance due to BRAF dimerization. However, since normal cells also express dimeric BRAF, these “dimeric RAF” inhibitors are predicted to suppress BRAF also in normal cells and be toxic at higher doses. Thus, therapeutic strategies of combining structurally complementary RAF inhibitors should yield better responses and forestall resistance in patients with BRAF-mutant tumors.

Response: Our study has both basic and clinical implications.

First, our findings revealed that crucial structural information needed to understand BRAF signaling and the effects of inhibitors is still lacking. Crystal structures of BRAF are so far limited to the catalytic domain of the protein and they cannot recapitulate the allosteric effects promoted by inhibitors that affect different parts of the protein and its interactions.

Second, our study revealed marked difference in the mechanisms of activation of BRAF by different mutations and their response to RAF inhibitors. The structural basis of these differences is critical for effectively targeting these tumors, but is still not well understood, requiring further biochemical and structural studies.

Finally, current clinical inhibitors, such as vemurafenib, dabrafenib and encorafenib suppress selectively the mutant form of BRAF and thus provide a broad therapeutic index when used in patients with mutant-BRAF tumors. Based on our findings, it should be possible to utilize next generation RAF inhibitors at moderate, non-toxic doses in combination with current clinical inhibitors for deeper and more long-lasting responses. Since a number of companies have next generation RAF inhibitors under development, such clinical trials can be designed immediately for patients with melanoma, thyroid and colorectal and other BRAF-mutant cancers.