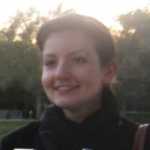 Dr. Wilke: Long-term exposure to ambient air pollution is associated with cerebrovascular disease and cognitive impairment, but the impact on structural changes in the brain is not well understood. We studied older adults living in the greater Boston area and throughout New England and New York and we looked at the air pollution levels and how far they lived from major roads. We then linked this information to findings from MRI studies of structural brain images. Although air pollution levels in this area are fairly low compared to levels observed in other parts of the world, we found that people who lived in areas with higher levels of air pollution had smaller brain volumes, and higher risk of silent strokes. The magnitude of association that we observed for a 2 µg/m3 increase in fine particulate matter (PM2.5) (a range commonly observed across urban areas) was approximately equivalent to one year of brain aging. The association with silent strokes is of concern, because these are associated with increased risk of overt strokes, walking problems, and depression.

Dr. Wilke: Our findings suggest that air pollution is associated with insidious effects on structural brain aging, even in dementia- and stroke-free individuals. This work aids in our understanding of what might be going on in terms of associations observed between particulate air pollution exposures and clinically observed outcomes like stroke and impaired cognitive function.

Dr. Wilke: These are findings that will need to be confirmed or refuted in future work. We believe it will be interesting to investigate the impact of air pollution over a longer period, its effect on more sensitive MRI measures, on brain shrinkage over time, and other risks including of stroke and dementia.