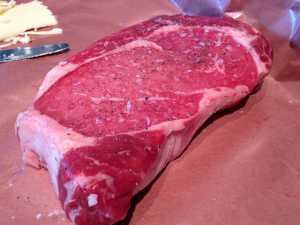 MedicalResearch.com Interview with: Marta Guasch-Ferre, PhD Research Scientist, Dept of Nutrition Harvard TH Chan School of Public Health Instructor of Medicine, Channing Division of Network Medicin Harvard Medical School Boston, MA, 02115   MedicalResearch.com: What is the background for this study? What are the main findings?  Response: Previous findings from randomized controlled trials evaluating the effects of red meat on cardiovascular disease risk factors have been inconsistent. But our new study, which makes specific comparisons between diets high in red meat versus diets high in other types of foods, shows that substituting red meat with high-quality protein sources lead to more favorable changes in cardiovascular risk factors. That is, to properly understand the health effects of red meat, it’s important to pay attention to the comparison diet. People do not simply eat more or less meat – it will almost always be in substitution with other foods.  END_OF_DOCUMENT_TOKEN_TO_BE_REPLACED
Continue Reading
AHA Journals, Author Interviews, Heart Disease, Red Meat / 31.05.2018

Jyrki Virtanen, PhD Adjunct professor of nutritional epidemiology Heli Virtanen, MSc University of Eastern Finland Institute of Public Health and Clinical Nutrition Kuopio, Finland  MedicalResearch.com: What is the background for this study? What are the main findings? Response: Previous studies have found that animal sources of protein may have an adverse impact on the risk of cardiovascular diseases, like myocardial infarct, whereas plant sources of protein have had an opposite impact. In this study we investigated that how protein intake from different dietary sources is associated with developing heart failure in men during the study’s follow-up. During the mean follow-up time of about 22 years, 334 men developed heart failure. The main finding of the study was that higher protein intake was associated with a moderately higher risk of heart failure and the findings were similar with protein from most dietary sources, although the association was stronger with protein from animal sources. Only protein from fish and eggs were not associated with the risk in our study. END_OF_DOCUMENT_TOKEN_TO_BE_REPLACED
Continue Reading
AACR, Author Interviews, Cancer, Cancer Research, University Texas / 10.11.2015

MedicalResearch.com Interview with: Xifeng Wu, M.D., Ph.D, Professor, Epidemiology Stephanie Melkonian, Ph.D University of Texas M. D. Anderson Cancer Center Medical Research: What is the background for this study? What are the main findings? Response: This study examines dietary intake of meat-cooking mutagens and genetic risk factors associated with kidney cancer in a population of 659 kidney cancer patients and 699 matched healthy control subjects from the community. We calculated the intake of several cancer-causing carcinogens that are produced when certain types of meat are cooked over an open flame and at high temperatures resulting in the burning, smoking or charring of the meat (for example, during barbequing or pan-frying). We found that kidney cancer patients consumed more red and white meat when compared to the healthy individuals, and also had higher intake of these cancer-causing chemicals created through the meat cooking process. These results suggest that meat intake, and the way we cook our meat, may potentially be linked to risk of kidney cancer. Additionally, we found that individuals with certain genetic variants were more likely to be susceptible to the harmful effects of the cancer-causing mutagens created during the process of cooking meat. END_OF_DOCUMENT_TOKEN_TO_BE_REPLACED
Continue Reading