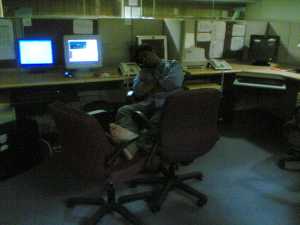 Dr. Céline Vetter Assistant Professor Department of Integrative Physiology University of Colorado at Boulder Boulder, CO MedicalResearch.com: What is the background for this study? What are the main findings?  Response: Shift work, particularly night shifts, can change our social rhythms, as well as the internal biological rhythms including our sleep, and these effects could explain why shift work is linked to conditions such as obesity and type 2 diabetes. However, we don’t know which type of shift pattern is most strongly linked to type 2 diabetes. In addition, we know that some lifestyle factors can modify the link between a genetic predisposition to a disease and the disease itself, but we don’t know if this applies to shift work and type 2 diabetes. END_OF_DOCUMENT_TOKEN_TO_BE_REPLACED
Continue Reading
Author Interviews, Occupational Health, Weight Research / 09.10.2017

MedicalResearch.com Interview with: Sun Miaomiao Prof. Shelly Tse JC School of Public Health and Primary Care The Chinese University of Hong Kong Sha Tin, Hong Kong MedicalResearch.com: What is the background for this study? What are the main findings? Response: Approximately 20% of the overall workforce is involving in a shift work schedule, which is equivalent to nearly 0.7 billion workers. It has been several studies and systematic reviews reported that shift work could contribute a risk to abdominal obesity, that was identified to be associated with increased mortality. However, the previous related studies derived from different industries and companies that held with various occupational settings of night shift work, and the results have been inconsistent or lack of statistical power. We believed that a better understanding of the knowledge gaps on the associations between specific obesity types and different shift work settings has important implications for occupational health practice. Our meta-analysis provided a clearer picture for the association between night shift work and overweight/ obesity with a potential gradient association, especially for the abdominal obesity. END_OF_DOCUMENT_TOKEN_TO_BE_REPLACED
Continue Reading
Author Interviews, Cancer Research, Melatonin, Occupational Health / 28.06.2017

MedicalResearch.com Interview with: Parveen Bhatti, PhD Associate Member Fred Hutchinson Cancer Research Center MedicalResearch.com: What is the background for this study? What are the main findings? Response: Evidence in humans for an association between shift work and cancer has been mixed. This may be due to difficulties in accurately assessing long-term exposures to shift work in studies of cancer risk. We took a different approach that circumvented these difficulties. Rather than look at cancer risk directly, we measured, among actively employed shift workers, a marker of DNA damage that has been linked to cancer. When repaired by cellular machinery, this particular marker is excreted in urine where it can be measured. We found that, compared to sleeping at night during their night off, shift workers had lower urinary levels of the DNA damage marker during their night work. This effect appears to be driven by reductions in circulating melatonin levels among shift workers during night work relative to night sleep. Given that melatonin has been shown to enhance repair of DNA damage, our results suggest that, during night work, shift workers have reduced ability to repair DNA damage resulting in lower levels being excreted in their urine. Because of this, shift workers likely have higher levels of DNA damage remaining in their cells, which can lead to mutations and cause cancer. END_OF_DOCUMENT_TOKEN_TO_BE_REPLACED
Continue Reading
Author Interviews, Cognitive Issues, Lifestyle & Health / 18.05.2016

MedicalResearch.com Interview with: Christian Benedict Ph.D Dept. of Neuroscience Uppsala University, Sweden MedicalResearch.com: What is the background for this study? What are the main findings? Dr. Benedict: A considerably large proportion of today’s workforce performs shift work. Both epidemiological and experimental studies have demonstrated that shift workers are at an increased risk for multiple diseases, such as cardiovascular diseases. However, knowledge regarding short- and long-term effects of shift work on parameters of brain health is still fragmentary. END_OF_DOCUMENT_TOKEN_TO_BE_REPLACED
Continue Reading
Author Interviews, BMJ, Circadian Rhythm, Cognitive Issues, Metabolic Syndrome, Occupational Health / 04.11.2014

MedicalResearch.com Interview with: Dr. Philip Tucker Department of Psychology | Yr Adran Seicoleg College of Human and Health Sciences | Coleg y Gwyddorau Dynol ac lechyd Swansea University | Prifysgol Abertawe Singleton Park | Parc Singleton Swansea | Abertawe Medical Research: What is the background for this study? What are the main findings? Dr. Tucker: Shift work, like jet-lag, is known to disrupt workers’ normal circadian rhythms (i.e. their body clocks) and their social life. It is also associated with greater risk of developing ulcers, cardiovascular disease, metabolic syndrome, breast cancer and reproductive problems. Several studies have also shown that shift workers experience heightened fatigue and sleepiness, particularly at night, and this may affect job performance and safety. However, very little is known about the long-term consequences of shift work on cognitive abilities. We followed a large sample of shift workers and non-shift workers over 10 years, testing their cognitive performance every 5 years. We found that the shift workers’ cognitive performance was lower than that of the day workers.  The difference was greatest for those who had worked shifts for more than 10 years. The shift workers’ cognitive function recovered after they quit shift work, but this recovery took at least 5 years from time that they stopped working shifts. The effects could not be attributed to poorer sleep quality among shift workers. Rather, it seems likely that the findings reflect the disruption of the shift workers’ circadian rhythms, which as been shown by other researchers to have an impact on brain structures involved in cognition and mental health over the lifespan. END_OF_DOCUMENT_TOKEN_TO_BE_REPLACED
Continue Reading
Author Interviews, BMJ, Circadian Rhythm, Diabetes, Occupational Health / 28.07.2014

MedicalResearch.com Interview with: Professor  Zuxun Lu School of Public Health Tongii Medical College Huazhong University of Science and Technology Wuhun, Hubei, China. Medical Research: What are the main findings of the study? Prof. Lu: The main finding of this systematic review and meta-analysis was that shift work is associated with an increased risk of diabetes mellitus (DM). The association between shift work and DM appeared to be independent of physical activity, family of history of DM and body mass index. We found that the increased risk of diabetes mellitus was more pronounced in rotating shift group and male shift workers than in other shift group and female shift workers, respectively. END_OF_DOCUMENT_TOKEN_TO_BE_REPLACED
Continue Reading